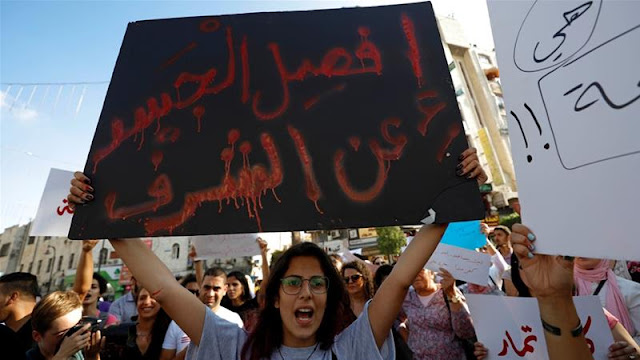 Hundreds of Palestinians demonstrated in the West Bank on Wednesday to demand legal protection for women after a 21-year-old woman died last month in what rights groups allege was a so-called "honour killing".

Israa Gharib was reportedly killed on August 22, just days after she was discharged from a hospital in her hometown of Beit Sahour near Bethlehem, where she had been admitted for a spinal injury two weeks prior, according to media reports.
A Palestinian Authority (PA) investigation was under way into the death of Gharib, a make-up artist who activists say was beaten by male relatives after a video posted on Instagram allegedly showed a meeting between her and a man who had proposed.
Gharib's family has denied the accusations. They said in a statement that Gharib had a "mental condition" and died "after she had a heart attack, following an accidental fall into the [family's] courtyard".
The circumstances surrounding Gharib's death have caused outrage within the Palestinian territories and on social media, with rights activists demanding action against the alleged perpetrators and legal protection for women under the hashtag #JusticeforIsraa.
At least 18 Palestinian women have been killed this year by family members angered at perceived damage to their honour, which may involve fraternising with men or any infringement of conservative values regarding women, according to the General Union of Palestinian Women and feminist institutions.

'We are all Israa'

In the West Bank city of Ramallah, female demonstrators held signs reading: "We are all Israa" and "My body is my property. I don't need your supervision, your care, your honour."
"I'm here to say enough is enough. We've lost enough women. Enough victims have died, have been killed, have been tortured, raped, harassed, and still there's no justice," said Amal Khayat, 30, an activist from Jerusalem.
Prime Minister Mohammad Shtayyeh said this week several people had been detained for questioning over Gharib's death as part of the inquiry by the PA, which exercises limited self-rule in the Israeli-occupied West Bank.
The Palestinian penal code dates to the 1960s and has been criticised for inadequate protection for women and lenient penalties for men who kill them in honour crimes.
"The case of Israa Gharib shocked our conscience just like those before her. These are women and girls who dream to live in safety in a society free from violence and injustice," the General Union of Palestinian Women and feminist institutions said in a statement.
The group called on the Palestinian government to "develop targeted programs that teach the principle of gender equality" and to reform laws to ensure accountability for perpetrators.