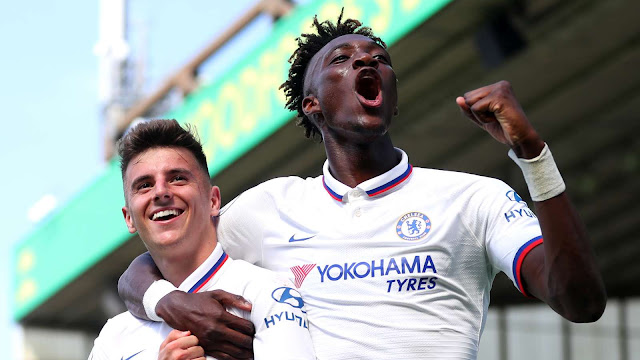 Chelsea’s exciting young side is considered by Tony Cascarino to make the Blues a modern-day version of Manchester United’s fabled Class of '92.


The Red Devils famously dipped into their youth system during the 1990s to bring through the likes of Ryan Giggs, David Beckham, Gary Neville and Paul Scholes.
Many sides have sought to copy that blueprint, but the demand for immediate success at the highest level means that Premier League clubs often turn to ready-made, big-money signings.
Chelsea have been prevented from dipping back into the transfer market by a two-window ban, with Frank Lampard forced to get creative in his squad building as a result.
He has turned to academy graduates such as Tammy Abraham, Mason Mount and Fikayo Tomori for inspiration and seen his faith rewarded as all 11 of the Blues’ Premier League goals have come from players under the age of 21 who were out on loan last season.
Former Chelsea striker Cascarino is delighted to see youngsters who may not have got a look in had the situation in west London been different proving once again that you can win with kids.
He told talkSPORT : “When we had the ‘Class of '92’ at Manchester United we applauded them for bringing all these young players through.
“Fergie (Sir Alex Ferguson) was very fortunate to have such a group of players coming through at the same time.
“I’ve always been frustrated of Chelsea having so much success in the youth system but never having that conveyor belt of bringing those players through into the first team.
“Tammy was one of a good number of players who probably wouldn’t have been in the team if Chelsea had a transfer budget. They probably wouldn’t have been anywhere near the first team, Tammy would have gone on loan somewhere else.
“So let’s give Lampard some credit here because he has got choices at Chelsea, their squad is big enough not to play these young players. Olivier Giroud could easily have played at centre-forward [against Wolves].
“At the start of the season it probably would have been Giroud first choice, Michy Batshuayi second and Tammy third, but Tammy has become the number one choice in a matter of three games. That’s credit to him but also the manager, because Frank has chosen to make that decision.
“Then you’ve got Mason Mount, Callum Hudson-Odoi waiting in the wings and Ruben Loftus-Cheek who is older than the others but you’d like to think he’ll play a lot this season.
“I’ve always thought it would have been such a mistake to have had all these great academy players and them not to have some sort of say in Chelsea’s future in the next five years, so I’m delighted.”
Abraham made history in his most recent outing for Chelsea , becoming the youngest player to record a Premier League hat-trick for the club.
His efforts, which include seven goals across his last three appearances, have helped Lampard’s side to recover from a slow start to the season and make their way up to sixth in the English top-flight table.