Abuja crime: Is Nigeria's capital city 'one of the safest in the world'? By BBC Africa 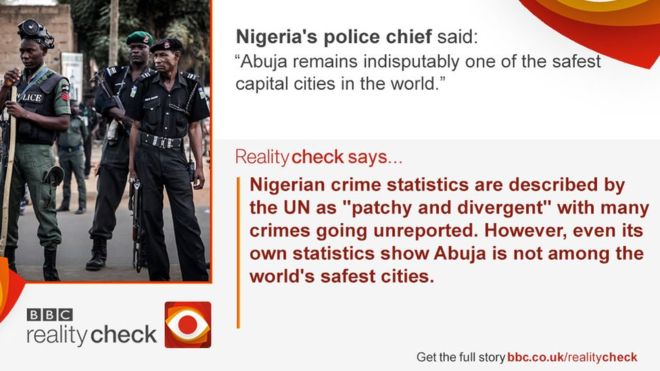 The national police chief, Mohammed Adamu, has sought to allay concerns by saying that Abuja actually has one of the lowest crime rates in the world.


Is he right?
Before we start looking at the numbers, it's important to consider the reliability of Nigeria's crime statistics.
Experts don't rate them highly - a recent United Nations report analysing homicide statistics describe existing Nigerian data as "patchy and divergent".
Security experts say many crimes go unreported in Nigeria because of distrust in the police, a lack of police presence on the ground, and a general feeling that reporting a crime will be unlikely to lead to redress.
The International Police Science Association, a group of security experts and researchers, ranks Nigeria bottom in a global index that measures factors including confidence in the police, corruption and security outcomes.
So the likelihood is that official statistics would significantly under-report crime rates in Abuja and across Nigeria.
Now, let's look at the available data, starting with the recorded murder rate in Abuja compared with other major cities around the world.

Deaths per 100,000
*Abuja and Lagos figures are murder rates, which don't include non-intentional killing.
Source: UNODC, Nigeria's National Bureau of Statistics
On this measure, Abuja does not rate among the safest cities, as the Nigerian police chief has claimed - and there are plenty of other cities we could have chosen as comparisons to make the point.
The government's own data suggests that the murder rate in Nigeria's largest city, Lagos, is lower per capita than it is in the capital, Abuja.
How about other measures of safety?
The Economist Intelligence Unit publishes an annual report on urban crime that ranks 60 cities across 57 indicators.
The safest ranked African city is Johannesburg in South Africa at 44. They haven't included Abuja, but Lagos is at the bottom of this list.
There are certainly more crimes committed in Lagos than Abuja - three times as many per head of population, according to Nigerian official data for 2017.
But Lagos is a much bigger city, and remember - the official recorded murder rate per capita was higher for Abuja.
So Abuja is clearly not as safe as Tokyo, Singapore, Osaka and Amsterdam - which are considered the safest cities in the world.
Abuja is a planned city and is relatively affluent. It was built from scratch in the 1980s and became the nation's capital in 1991.
It's the centre of government and home to foreign embassies, diplomats and businesses.
However, instability in the rest of the country and Abuja's relative wealth have meant that crime and violence is often spilling over into the capital.
The BBC's Hausa language service says residents are concerned about the rise in kidnappings - and were disappointed with the police chief's statements.
"The city, once considered an island of safety amidst the surge of incidents elsewhere, now appears increasingly vulnerable," says Nnamdi Obasi of the International Crisis Group.
"The influx of people displaced by rural poverty, armed conflicts and violent crime in many parts of the country is continually swelling the population of the city's unemployed youth, with many susceptible to criminal life," he adds.
Features