Why I joined ambitious Arsenal - Pepe 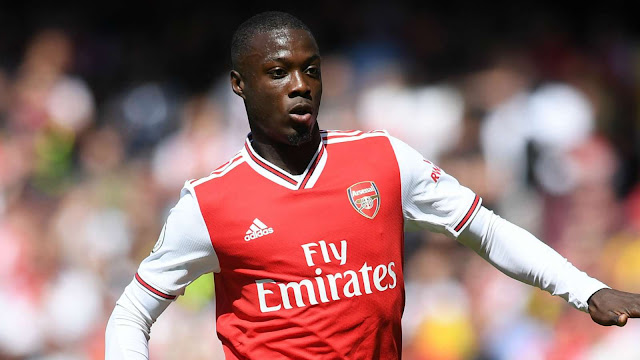 Arsenal forward Nicolas Pepe has revealed the club's aims for the 2019-20 season.


The Gunners failed to qualify for the Champions League after their fifth-place finish in the Premier League last season and will play in the Europa League.
Aside from their top-four failure, Arsenal suffered a disappointing 4-1 loss to rivals Chelsea in the Europa League final back in May.
It was a contrasting run for Pepe in the 2018-19 campaign after helping Lillequalify for the Champions League with 22 goals and 11 assists in Ligue 1.
While defending his decision to move to the Emirates Stadium, the Ivorian forward disclosed his ambition is to help Unai Emery’s side return to the elite European stage this season.
"I chose to come here because it's a club with a lot of ambition. They have the dream of coming back to the Champions League and I am also an ambitious person, so the choice was very logical," Pepe told Arsenal Player.
"I am attracted to the Premier League because it is an extremely intense championship and the best league in the world. The idea is to win the Europa League and that is a goal of ours. It's a European event and our goal is to do better than last season. I believe we will."
Meanwhile, Pepe lauded Emery for helping him settle down at the club after his first few weeks in North London.
The 23-year-old has played in Arsenal's opening two games in the Premier League, garnering 63 minutes of action.
Article continues below
"It's been really good because he speaks French and it has been much easier for us to communicate," he continued.
"I am new, the strategy and tactics are new and it really helps that I can get the coach's assistance. Now I need to learn English and this is something he is helping me with also."
Pepe will hope to play a part when Arsenal visit Liverpool at Anfield for Saturday's Premier League fixture.
Sports