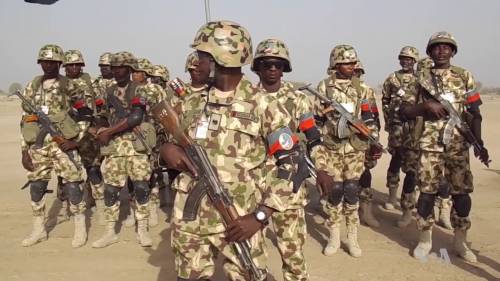 President Muhammadu Buhari has hinted on possible changes in the nation’s security architecture to sustain the fight against terrorists and deal with violent crimes in Nigeria.


The president gave the hint when he received traditional rulers from the country's South-west region at the Presidential Villa, Abuja on Wednesday.
President Buhari told the rulers that he had recently directed a reshuffle in the army where Lt.-Gen. Lamidi Adeosun was promoted and deployed as the army’s chief of policy and plans.
“I believe you are aware that there is a reshuffle in the Army, including the promotion and deployment of Lt.-Gen. Lamidi Adeosun as the Nigerian Army’s Chief of Policy and Plans.
“This is done in order to reinvigorate and reenergize our troops to do more. There will be further reviews where necessary for maximum performance," the president said.
He added, “Let me be very clear about our firm resolve to change the security architecture of Nigeria. It is one of the top priorities for this government but we won’t be able to achieve this goal without the support and input of you, our royal fathers.
“We hope that, for instance, traditional rulers will be able to observe new entrants into the community by requesting leaders of such ethnic groups to notify the traditional authorities of new intakes, thereby creating the opportunities for the gathering of actionable intelligence which tracks such movements in and out of communities thereby offering early warning signals.’’
News