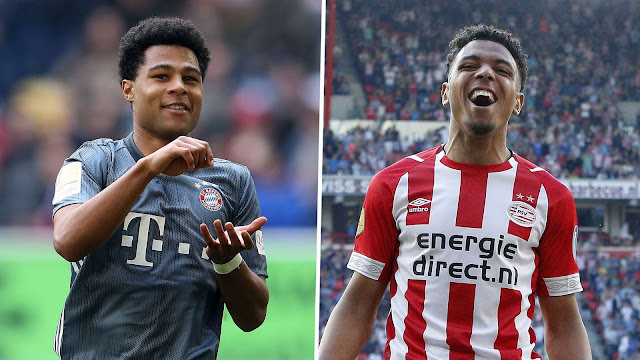 The Gunners have put several youngsters on the path to stardom but now need to find a way to make more money on the players they produce
Serge Gnabry, Ismael Bennacer, Jeff Reine-Adelaide and Donyell Malen. At first glance, just a short list of talented young footballers with no obvious deeper connection.
Take a closer look, however, and you’ll notice that all four share a past at Arsenal, failed to make the grade at the Emirates Stadium and have since gone on to make a name for themselves elsewhere.
Gnabry said farewell to Arsenal in favour of a move to Werder Bremen in 2016 and is now a key figure for both Bayern Munich and Germany.
Bennacer left north London behind in 2017 and earned himself a move to Serie A giants AC Milan earlier this month.
Reine-Adelaide permanently swapped the Gunners for Angers in 2018 and then convinced Lyon to spend £25 million ($30m) on him ahead of the 2019-20 campaign.
Malen, meanwhile, opted to continue his career at Eredivisie powerhouse PSVin 2017 and now finds himself on the verge of a first call-up for the Dutch national side.
The easy conclusion to take from that would be that those in charge at Arsenal should be punching themselves in the face for allowing such a gifted quartet to get away from them.
That is too simple a train of thought, though.
Arsenal were well aware of Gnabry’s potential and were keen to hold on to the Germany international, even after an underwhelming loan spell at West Brom.
The winger, however, was not convinced the Premier League was the right place for him to take the next step in his development and rejected the chance to sign a new deal.
“It was the right decision [to leave Arsenal],” Gnabry said shortly after his move to Werder. “I wanted to get more playing time and it worked. Arsenal wanted to keep me, badly. But I had to look after my development.”
So no matter how highly Arsenal rated Gnabry, they had little option but to cash in after he made it clear he would not be signing a new deal.

Bennacer’s situation, meanwhile, was slightly different. Although there was little doubt the Algeria international had plenty of potential, Arsene Wenger wasn’t convinced he had what it takes to make his mark at Arsenal.
“According to Wenger, there were many players in midfield at the club,” Bennacer said upon his departure. “After that, I did not want to take chances and waste more time. I wanted to play consistently.”
There’s no denying the midfielder has since made significant steps, but the fact that Arsenal opted against exercising their buy-back option shows they feel he is not at the level required at the Gunners.
Reine-Adelaide, meanwhile, seemed destined for a bright future at Arsenal when he made his first-team debut at the tender age of 17, but his development seemingly stagnated, partially due to physical problems.
Wenger had not given up on him when Reine-Adelaide went out on loan to Angers, but new boss Unai Emery happily cashed in on the versatile midfielder after replacing the legendary Arsenal boss in 2018, with Reiss Nelson, Joe Willock and Emile Smith Rowe all having moved ahead of him in the pecking order.
Malen, finally, joined the club as one of the best around in his age category, but found the physicality of the English game difficult and did not develop at the pace the club had hoped for upon his arrival.
They still saw a future for the gifted attacker at the club, but Malen’s desire to return to Netherlands in order to get his career back on track prompted them to allow him a move back to his native country.
“It's not true that Arsenal sent me away. I still had a contract for a year and Arsenal were keen to renew it," Malen told De Telegraaf earlier this year. "But football is not about money for me. That's never been the case. I would not have left England otherwise.”

So, even though it might seem like a straightforward case of the decision-makers at Arsenal getting it wrong, a more nuanced look at each individual case is needed to put things in perspective.
Arsenal are a club aiming to challenge for top honours and that results in stiff competitions for places, which in turn can prove to be an obstacle on the path into the first team for the club’s promising youngsters.
Players like Willock, Ainsley Maitland-Niles and Nelson recently made the step up, but it’s survival of the fittest and the likes of Gnabry, Bennacer, Reine-Adelaide and Malen all slipped through the cracks.
That is not necessarily a bad thing for the Gunners, though. Their success is proof of the strength of the club’s academy and, if anything, Arsenal should be proud to have turned them into the players they are now.
The next step is to now find a way to get a proper financial reward for their hard work with the players that don’t make it at the Emirates. Arsenal made roughly £15m ($18m) on the aforementioned quartet after sell-on bonuses, a fraction of what they’re worth in today’s market and a hugely underwhelming figure.
Article continues below
For comparison, Chelsea sold academy graduate Nathan Ake to Bournemouth for £20m ($24m), while Liverpool offloaded former academy player Jordon Ibe to the same club for £15m ($18m).
The recent sale of Krystian Bielik to Derby County might be a sign of what’s to come, though. The 21-year-old made only two senior appearances for Arsenal, yet netted them £10m ($12m), which paid for the transfer of David Luiz and a chunk of Brazilian youngster Gabriel Martinelli’s transfer fee.
If Arsenal can build on that in the future, their youth academy will not only start to pay off on the pitch, but off it as well.
Sports