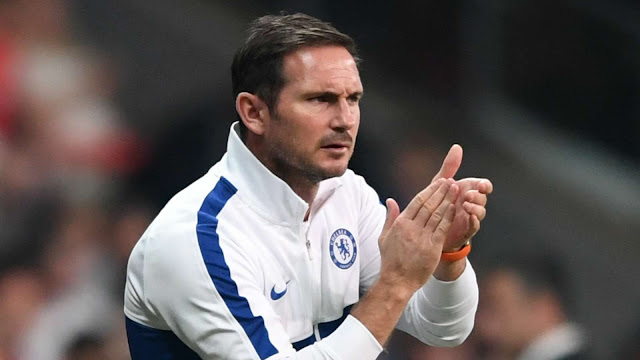 The new man in charge at Stamford Bridge is looking to play the right way, but his star names are being naive, says his ex-England team-mate
Chelsea's style of play and set-up under Frank Lampard has been compared to basketball by defender-turned-pundit Jamie Carragher.
The Blues have launched forward at every opportunity under their new coach, but that has allowed huge gaps at the back, something which should concern Lampard according to Carragher, who he played alongside for England.
Having lost 4-0 away at Manchester United on opening day, the west London club were held at home by Leicester City on Sunday to leave Blues legend Lampard looking for his first win in charge.
And while Carragher believes Lampard has the right idea, he feels his players are being naive and need to use their heads more when attacking.
"It's like watching a basketball game," Carragher said on Sky Sports' Monday Night Football of the draw with Leicester. "The idea of Frank is spot on, it's the way top sides, top managers want to play.
"People talk about them being naive and getting caught on the counter-attack, they've got no organisation in possession."
Carragher identified the experienced trio of Cesar Azpilicueta, Jorginho and Willian as being guilty of not executing the system to perfection - bombing on but then neglecting their defensive responsibilities and leaving Chelsea vulnerable.
"Frank wants his full-backs to go forward. (Cesar) Azpilicueta (should be) experienced to know he doesn’t need to go every time. They keep getting counterattacked every time, leaving spaces, because they're not organised in attack.

"I don't think they have to take it to the letter of the law, exactly what the manager says. Use your brain, drop in.
"Experienced players like Jorginho go flying out, doesn’t make the challenge and then there’s massive holes in the middle of the pitch.
"It's too easy to get out (for Leicester), which is why it's like a basketball game. They probably should have lost the game really."
Article continues below
"Willian, who I absolutely love, if Frank could have had another substitute he would have taken him off, he was that bad," he added.
"They can’t sustain an attack, keep the ball and they’re so open."
Chelsea will hope to secure their first win of the season when they travel to Norwich City on Saturday.
Sports