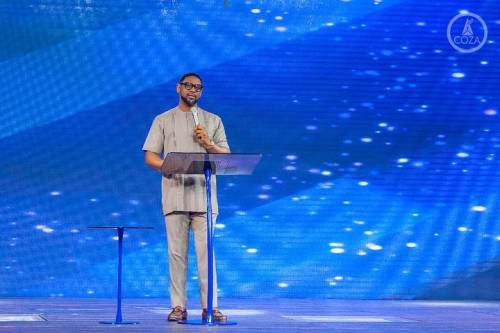 As protests of the #ChurchToo movement mobilised on social media demanding justice and investigations into rape allegations levelled against Pastor Biodun Fatoyinbo of Commonwealth of Zion Church Abuja got underway on Sunday, a group of local men showed up in counter-protest pledging support for Fatoyinbo.


As journalist quizzed the protesters on their mission, the protesters excitedly told journalists on camera they were offered N10,000 to stage pro-Fatoyinbo protest in Abuja.
One protester said, "Money is talking! Money is talking!"
When queried on who paid him, he replied, "He said he will give us N10,000."
We observed that the hired thugs were also given soft drinks to infiltrate the group of protesters.
The #ChurchToo movement is holding simultaneous protest at COZA churches in Lagos and Abuja after Busola Dakolo detailed how Pastor Biodun Fatoyinbo allegedly raped her as a teen choir member in his church.


Fatoyinbo has denied the allegations.
News