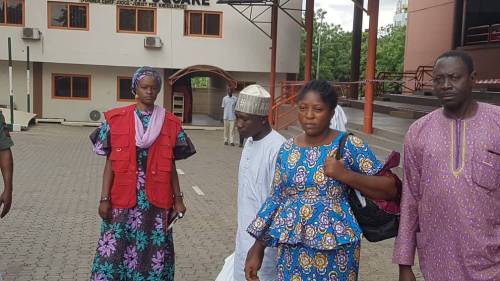 Four officials at the Joint Admission and Matriculation Board (JAMB) have been granted bail in the sum of N25 million, N20 million, and N6 million at the Federal Capital Territory(FCT) High Court in Maitama on Tuesday.


The officials in the persons of  Samuel Umoru, Daniel Agbo, Priscilla Ogunsola, and Aliyu Yakubu had been charged to court for allegedly misappropriating funds belonging to JAMB
However, according to News Agency, Mr. Umoru, a state coordinator, was charged alongside Philomena Chieshe was on eight-count but and could not get his bail till today.
The presiding judge over the issue, Peter Affen, held that bail was not about setting people free but to ensure that a defendant attends the trial.
Mr. Affen then granted Mr. Umoru bail in the sum of N25 million with two sureties that are resident in Abuja.
He ordered that one of the sureties must have landed property in Abuja worth the value of the bail sum.
Mr. Affen further ordered the defendant’s counsel, Ifeanyi Ihejirika, to put in writing the good characters of the sureties.
He added that the court registrar would then verify the addresses of the sureties, while the defendant must drop his international passport with the court.
The judge also ordered that the defendant be remanded in Kuje prison until he meets the bail conditions.
He then adjourned September 30 for the commencement of trial.
Meanwhile, Mr. Ihejirika prayed the court to admit his client to bail, arguing that contrary to the submissions of the prosecution, he did not jump EFCC’s bail.
He said his client was not granted administrative bail by EFCC and did not jump bail.
The prosecution counsel, Yetunde Alabi, did not oppose the application.
In the case of Daniel Agbo, the judge granted him bail in the sum of N6 million and one surety in like sum.
The judge said the surety must depose to an affidavit of means.
He then adjourned to October 10 for further hearing of his matter.
Mr. Agbo was on Tuesday arraigned by the EFCC on four counts bordering on misappropriation and breach of trust.
The EFCC alleged that as a state coordinator in charge of Lokoja, Kogi State, Mr. Agbo misappropriated N6 million.
In a similar trial, the court granted bail to two other JAMB officials, Priscilla Ogunsola and Aliyu Yakubu, in the sum of N20 million each with two sureties in like sum.
Mrs. Ogunsola who was JAMB Co-ordinator in Benin was separately arraigned on a four-charge bordering on criminal breach of trust and dishonesty use of JAMB funds to the tune of N26.4million.
After pleading not guilty to the charges, her counsel, Friday Obainoke, applied for her bail.
Mr. Yakubu, JAMB revenue officer in Kano, was arraigned on eight counts bordering on misappropriation of N20 million.
The judge granted bail to Mr. Yakubu, in the same conditions as Mrs. Ogunsola’s, following the argument made on his behalf by his counsel, Mark Feese
Mr. Affen ordered that the sureties in both cases would have to be recommended to the court in writing by the defendants’ counsel.
He further ordered that the sureties should swear to an affidavit of means and possesses landed property equivalent to the bail sum in Abuja.
Mrs. Ognsola and Mr. Yakubu were ordered to drop their international passports with the court, while they are remanded in Kuje and Suleja prison pending the fulfillment of their bail conditions.
Mr. Affen then adjourned to October 10 and October 15, for the commencement of trial.
Edu News