Lewis Hamilton says he was racially abused at school 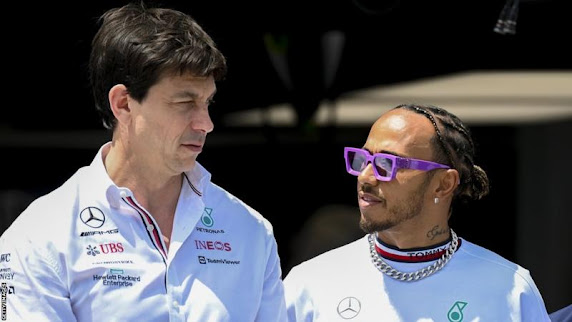 The Mercedes driver, 38, says his school days were "probably the most traumatising and most difficult part of my life".

Hamilton said: "I was already being bullied at the age of six.

"At that particular school, I was one of three kids of colour and just bigger, stronger, bullying kids were throwing me around a lot of the time."

Speaking to the On Purpose podcast, the seven-time Formula 1 champion detailed a number of racially abusive terms that he was referred to at school.

Hamilton added: "Not knowing where you fit in, that for me was difficult.

"When you go into history classes and there are no people of colour in the history they were teaching us. I was thinking, 'Where are the people who look like me?'

"In my [secondary] school there were six or seven black kids out of 1,200 kids and three of us were put outside the headmaster's office all the time. The headmaster just had it out for us - and particularly me.

"I really felt the system was up against me and I was swimming against the tide. There were a lot of things I suppressed.

"I didn't feel I could go home and tell my parents that these kids kept calling me [racist terms], or I got bullied or beaten up at school today. I didn't want my dad to think I was not strong."

In recent years, Hamilton has embarked on a campaign to increase diversity in motorsport.

He set up a commission to study why ethnic minorities are under-represented in the sport, established his Mission 44 campaign to look at ways of supporting young people from under-served backgrounds, and is working with Mercedes on increasing diversity within their team, and in F1.

Hamilton embarks on his 17th season in F1 in March and is entering the final year of his latest Mercedes contract.

Team principal Toto Wolff said earlier this month that he was confident Hamilton would agree a new contract to continue racing beyond the end of this year.

"We have a full year to go," Wolff said. "We are so aligned - in the last 10 years our relationship has grown.

"It's just a matter of him physically being back in Europe, sticking our heads together, wrestling a bit, and then leaving the room with white smoke after a few hours."