It is the end of the road for Frank Lampard: Everton manager sacked after defeat by West Ham 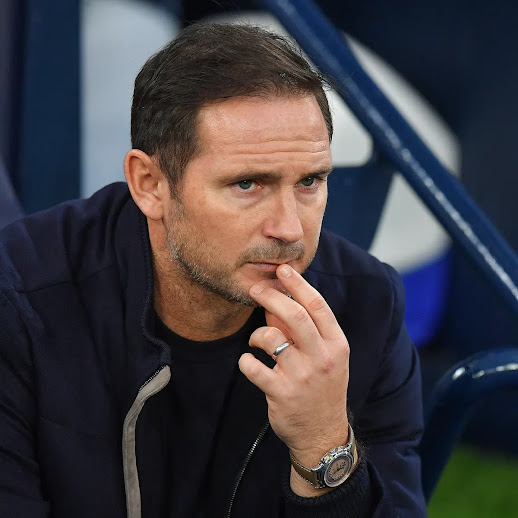 They are second from bottom of the table with 15 points from 20 matches, above Southampton on goal difference.

Everton are now looking for their sixth permanent manager in five years.

The club thanked Lampard and his coaching staff "for their service during what has been a challenging 12 months".

"Frank and his team's commitment and dedication have been exemplary throughout their time at the club, but recent results and the current league position meant this difficult decision had to be taken," added a club statement.

Everton said they had "started the process to secure a new manager".

Former Leeds United manager Marcelo Bielsa is on the list of candidates under discussion as a potential successor to Lampard.

The 67-year-old Argentine, who is admired by Everton owner Farhad Moshiri, has not worked since being sacked by Leeds in February last year, although he remains a hero at Elland Road for taking the club back into the Premier League.

It remains to be seen whether Bielsa would take a job in mid-season while former Burnley boss Sean Dyche is sure to be discussed.

Former Southampton manager Ralph Hasenhuttl was discussed by Everton's board before Lampard's appointment a year ago and is available after leaving St Mary's in November.

Paul Tait and Leighton Baines will take training until a new manager is appointed.

After a 1-1 draw at reigning champions Manchester City on 31 December, Everton have lost 4-1 to Brighton at Goodison Park, were knocked out of the FA Cup with a 3-1 defeat at Manchester United and were then beaten by Southampton despite taking the lead, before the latest defeat by West Ham.

They have managed only three wins all season.

There have been widespread and vocal protests from fans against the board in recent games, and supporters staged a sit-in demonstration after the loss to Southampton.

Everton's board of directors missed that game because of what the club claimed was a "real and credible threat to their safety".

Merseyside Police said no threats or incidents had been reported to officers prior to the fixture before Everton announced "enhanced security procedures" would be put in place.

That was also in response to some supporters confronting defender Yerry Mina and midfielder Anthony Gordon as they left Goodison Park in their cars last weekend.

Everton owner Farhad Moshiri attended his first game in 14 months at West Ham, along with much-criticised long-serving chairman Bill Kenwright. Moshiri suggested, when questioned by Sky Sports at the game, that it was not down to him decide on Lampard's future.

The club are yet to sign anyone in the January transfer window but spent in excess of £80m in the summer, including the £33m signing of Amadou Onana from Lille and £20m purchase of Dwight McNeil from Burnley, after receiving £60m for Brazil forward Richarlison from Tottenham.

Lampard took his first steps in management with Derby in 2018. In his one season in charge, they reached the Championship play-off final, where they lost to Aston Villa.

He replaced Maurizio Sarri as Chelsea manager in July 2019, but was sacked after 18 months.

Lampard took over at Goodison with Everton 16th in the table, six points above the relegation zone.

Everton had 10 defeats in the remaining 18 games of the season, but secured their survival with a 3-2 comeback victory against Crystal Palace on what Lampard called "one of the greatest nights" of his career.

'Everton are staring the obvious in the face'

"I feel for Frank Lampard because he's come into a situation where he's having to deal with a lot of problems from previous decisions from the board and managers," said Stubbs, who captained Everton to a fourth-place finish in 2004-05.

"Ultimately it got to the stage where it was inevitable. His record hasn't been great this season and unfortunately he's lost his job as a result of it."

Campbell added: "Results probably in the end got the better of Frank Lampard but this sacking puts the magnifying glass on the football club, and the board are going to be scrutinised for what they do next."

However, despite agreeing with the decision, both said the situation highlighted deeper issues at Goodison Park.

"There is no doubt [that the problems are deeper]." said Stubbs.

"From top to bottom, there are things that are not right for the football club. Everton, I think, are staring the obvious in the face as we speak. Whoever comes in, and I have to be honest I don't know who it will be that can save them, they've got a monumental job to keep them up this season."

Campbell, who played for the club between 1999 and 2005, added: "There has to be a plan. Everton Football Club having no footballing foundation is crazy.

"I just think to myself you cannot build anything on sand. The fans know it, ex-players know it, people in football know you have to build from a foundation. It is going to be interesting to see what the board and owner do because all the eyeballs are on them right now."

"The most disappointing thing is we have a week of the transfer window to go, no manager in charge," Ratcliffe, who played 493 times for the club between 1980 and 1992, told BBC Radio Merseyside. "No-one at the football club, I think, has asked: 'What do we do after Frank?'

"We can't keep replacing managers. We have to start looking deeper. The players, they aren't good enough; recruitment, it's not been good enough. The recruitment has been shocking.

"The way we are going, we will be relegated. The form we are in, it's relegation form.

"As an ex-player and ex-captain, it's been frustrating to watch."

'Everton have to get it right, but track record inspires no confidence' - Phil McNulty analysis

Frank Lampard's sacking as Everton manager is the latest chapter in a story of dysfunction and instability under owner Farah Moshiri and a board of directors who are facing open revolt from supporters.

He is Moshiri's sixth managerial sacking, with Carlo Ancelotti quitting to rejoin Real Madrid, underscoring the chaos at Goodison Park, where a transfer spree of more than £500m has left Everton working within Financial Fair Play limitations.

Of more immediate concern is who can Everton's board tempt to a club lying 19th in the Premier League amid a toxic atmosphere?

It is a huge task for any incoming manager, with morale at rock bottom and Everton again fighting relegation to the Championship.

Moshiri and Everton have to get it right - the problem being their dismal track record does not inspire confidence that they will.