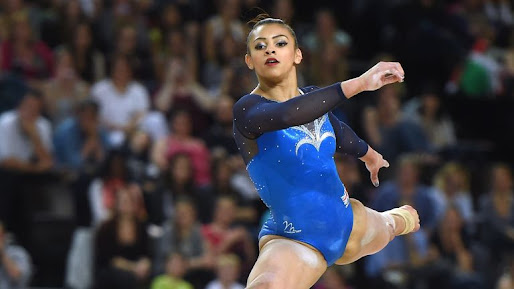 Downie, 23, announced her retirement with a statement on social media on Monday.

Downie won 12 medals during her senior career, including a historic all-round European Championship gold in 2017.

"I want to stay within realms of it, but it was how people were treating me."

In 2020, Downie and her sister Becky spoke out about abusive behaviour in British Gymnastics, saying it was "ingrained" and "completely normalised".

Last year, the Whyte Review found systemic abuse in the sport in Britain, but Downie says speaking out hindered her further selection.

"At the time I was pretty confident to [speak out]," she said. "Ultimately it did really hinder us a lot, we both didn't make the Tokyo Games. But I really wanted to make a positive change.

"When I got to the last trial [before Tokyo], I decided to pull out. But the whole scenario around it, no-one came up to me, I sat on the bench crying, the coaches ignored me.

"I went home without anyone speaking to me before I left, - that was absolutely heart-breaking."

Downie, an Olympian at Rio in 2016, said she had been considering retirement since October, shortly before the World Championships.

"I got asked to be a reserve before trials, but then to not get picked it put me in a very low state.

"Ultimately I knew I couldn't carry on, because I didn't think I would ever get picked again."

Downie lost her brother Josh in 2021 after he suffered a heart attack during cricket training, and while she says she "lost direction" following his death, she felt it was used as a "narrative" to justify her non-selection for the Tokyo Games.

"I was coming in as a reigning world medallist, with the potential to do well in Tokyo if they would help me along the way," she said.

"I didn't speak on it at the time, it was too painful to talk about. It's only been until now that I've felt like I can and strong enough to do so."

Chief executive of British Gymnastics Sarah Powell said Downie was a "trailblazer in how she has reflected on her experiences to challenge and push the sport of gymnastics forward."

"Her bravery and honesty, privately and publicly, helps shape the future of our sport," she said.

Powell added that Downie "produced history making performances on the world stage" and "helped lead a ground-breaking group of British women's artistic gymnasts and in doing so inspired generations of younger gymnasts to reach their goals."

In announcing her retirement, Downie also shared an interview with her on Dr Alex George's podcast Stompcast., where she spoke in depth about her reasons to retire and experiences she had in her career.

In that interview Downie also said:

Speaking later to the BBC, Downie also added that she felt she had "nothing to lose now" in speaking out about the issues.

She said that "ultimately' she didn't feel like "they wanted me back that much".

In response to the claims in the podcast, British Gymnastics said in a statement: "She's raised issues that we are already aware of and are being addressed, particularly around the conduct and communication of a member of our coaching team.

"As part of the wide reform of gymnastics being undertaken, we must ensure appropriate behaviours and attitudes are maintained and always reinforced."

In response to the email claim, the governing body said it "did not meet our standards or reflect our values as an organisation" and a disciplinary process was ongoing.

"Our Performance Director immediately sent correspondence to recipients outlining that some of the language and tone was unacceptable and not in line with our culture and commitment to reform," British Gymnastics added: "A subsequent discipline and education process took place and this is being monitored as an ongoing process."

British Gymnastics put together an action plan called Reform '25 to deliver on the findings of the Whyte Review.

"Our Reform '25 action plan makes it abundantly clear that abuse, mistreatment, and a culture of fear have no place in gymnastics, and that nothing is more important than the safety and wellbeing of gymnasts and everyone involved in the sport," the statement continued.

"The reforms we have already put in place in bringing in two new Performance Directors in Tracy Whittaker-Smith and David Hart, together with Scott Hann as Technical Advisor, were made to ensure these kinds of issues were addressed.

"We still need to go further and faster over the next two years of delivering our plans, but the immediate response and subsequent action to deal with this email is a demonstration that progress is being made."