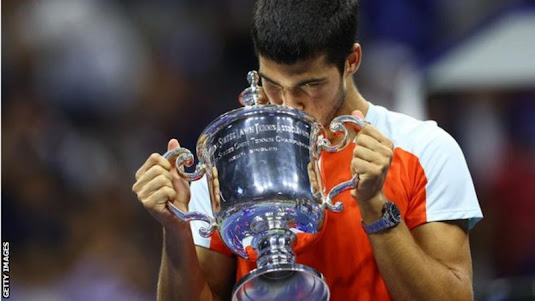 The 19-year-old is the youngest men's Grand Slam champion since Rafael Nadal won the French Open in 2005.

Ruud, 23, would have become the new world number one if he had won, but has now lost both of his two major finals.

Instead it is Alcaraz who replaces Russia's Daniil Medvedev at the top, becoming the first teenager to climb to the summit in the 49-year history of the ATP rankings.

After hitting a routine forehand long on his first championship point, Alcaraz took his second with a service winner out wide and instantly fell flat on his back in celebration in New York.

Alcaraz, who saved two set points in the third which would have put Ruud ahead, ran up to his team in the stands and danced with them in a huddle, before returning to his seat where he was crying at the same time as smiling.

"This is something which I dreamt of since I was a kid, being number one in the world and a champion of a Grand Slam," said Alcaraz, who saved a match point against Jannik Sinner in the last eight to reach his first major semi-final.

"It is something I have worked very hard for. It is really, really special."

The first of many for Alcaraz?

Alcaraz, with his powerful hitting and supreme athleticism, has long been tipped for greatness.

Since being identified as a potential superstar aged 11, he has developed under the guidance of former world number one Juan Carlos Ferrero and taken his game to new levels this season.

Now Alcaraz has made his breakthrough on one of the biggest stages in the sport.

Over the past fortnight he has shown his talent and heart to win over legions of new fans, demonstrating why he is considered by many as the player best placed to replace Nadal, Novak Djokovic and Roger Federer at the top of the men's game in the coming years.

Generally, over the course of a near three-and-a-half hour win over fifth seed Ruud, he looked unburdened by the weight of history.

The pair played to a high level throughout an engrossing match, with Alcaraz playing the bigger points better in front of a 24,000 crowd largely supporting the Spaniard.

A single early break proved the difference in the first set, giving a strong platform to Alcaraz - who had won his previous 21 matches at a major after taking the first set.

After showing signs of frustration as Ruud levelled the match, Alcaraz had to show fight in the third set.

Alcaraz - who had won three epic five-setters in a row to reach the final - looked to be lacking energy on certain shots, but Ruud could not capitalise fully as his opponent stopped him going ahead.

That provided the Spaniard with the impetus to eventually dominate the fourth set, breaking for a 4-2 lead and showing steel to see out victory.

While Alcaraz had already been hyped for several years, Ruud's progression has been much steadier and attracted far less attention.

The 23-year-old reached a first Grand Slam final at the French Open earlier this year, but was outclassed there by Nadal in a one-sided defeat.

Ruud's strength as a clay-courter is also illustrated by the fact he has won eight of his nine career titles on the surface and few would have expected him to make such a deep run on the hard courts at Flushing Meadows.

A 65-1 outsider at the start of the tournament, he even said himself he had not expected to reach the final.

But the new world number two has an excellent all-round game and proved in New York, in addition to runs to the Miami final in April and the Montreal semi-finals last month, he can be a force on the surface.

Ruud showed that as he fought back to push Alcaraz, but was left to rue his failure to capitalise when he was beginning to get on top in the latter stages of the third set.

"You can say that was the set that maybe decided the match," said Ruud. "He played aggressively and well on those two set points.

"I played a horrible tie-break, unfortunately too many mistakes. I guess I couldn't get those set points out of my head. It was unfortunate."

Teenage male Grand Slam champions were not an unusual sight in the 1980s. Mats Wilander, Michael Chang and Boris Becker all won their first major title at the age of 17.

But since 1990, as the game has become more physical, winning seven best-of-five-set matches over two weeks as a teenager has been beyond everyone bar Rafael Nadal and now Carlos Alcaraz.

What is so intimidating for the rest of the world is that Alcaraz appears already to be virtually the complete player, even though his coach Juan Carlos Ferrero thinks he has reached just 60% of his potential.

He has lightning-quick feet, power, touch, stamina and the self-belief that can turn matches at their pivotal moments. If that is not enough, he also looks to be a natural serve-volleyer.

Or, as his fellow Spaniard Nadal once memorably put it, the 19-year-old has "all the ingredients to make a great salad".