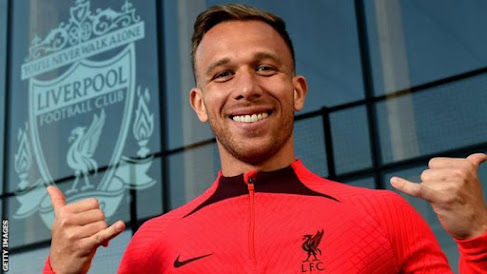 The Brazil international, 26, made 31 appearances for Juventus last term but has not played in this campaign.

"I'm really happy to be here wearing this great shirt with this famous badge that represents so much in world football. It's a dream," Arthur said.

"I'm really happy and highly motivated to continue living my dream on the pitch and giving my all in a Liverpool shirt," added Arthur.

Like another compatriot Fabinho, he is viewed as a player capable of occupying a deeper midfield role and will not restrict the pathway of youngsters Harvey Elliott, Fabio Carvalho and Curtis Jones.

Reds captain Jordan Henderson was substituted after picking up a hamstring injury during Wednesday's 2-1 win over Newcastle United.

Liverpool boss Jurgen Klopp says the 32-year-old will "definitely not be available" for the Merseyside derby against Everton on Saturday.

Liverpool's move for Arthur Melo seems to make perfect sense. He's Brazilian for a start - that always helps - and he'll fit in nicely with compatriots already in the Anfield dressing room.

But, more importantly, he's experienced at the top level, he's good on the ball, a good passer and seems to be able to play different roles in the midfield area. Holding, playmaker, box to box, all that.

With Jordan Henderson the latest injury worry, a new midfielder may be necessary although Jurgen Klopp said it had to be the RIGHT player.

Perhaps Liverpool have found him.