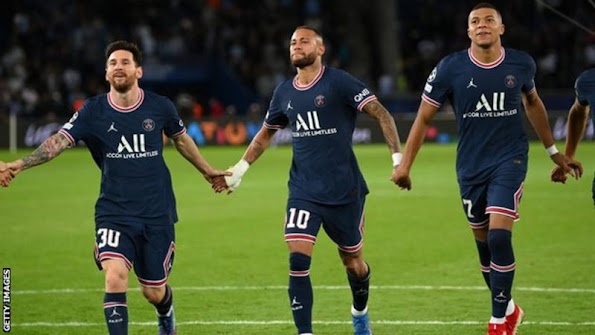 It was always assumed that Messi and Barcelona had an unbreakable bond, but the Catalan club's financial situation dictated otherwise and it led to the formation of a star-studded attacking trident, with Neymar and Kylian Mbappe already in the French capital.

Things did not go smoothly during their first season together in Paris though and, despite winning the league, the trio struggled to perform as a cohesive unit that maximised each other's talents.

This culminated in a Champions League last-16 exit at the hands of Real Madrid.

PSG only scored two goals in 180 minutes, which both originated from Mbappe's individual speed and brilliance, rather than any move involving himself, Neymar and Messi.

Former boss Mauricio Pochettino's tactical set-up was seen a major contributor to this, with a reluctance from the Argentine coach to deviate from a 4-3-3 system, leaving 35-year-old Messi and Neymar, 30, in the wide forward roles - not ideal for players lacking explosive page at this stage of their careers.

So, before PSG's Champions League opener at home to Juventus on Tuesday, what has changed since Pochettino's departure?

And could the summer arrival of former Lille and Nice coach Christophe Galtier finally help end their wait for Champions League success?

Messi, Neymar and Mbappe have made an explosive start to the new campaign, with 32 goals and assists between them already this season, as they relish Galtier's 3-4-3 formation.

Neymar and Messi have already got 22 goals and assists after six games this campaign, compared to just 36 in all of last season.

With Sergio Ramos and Marquinhos' range of passing and Presnel Kimpembe's ability to carry the ball into midfield, PSG possess three centre-backs who provide the perfect platform to play possession-based football.

The system also meshes well with the style of their wing-backs. Nuno Mendes and Achraf Hakimi are explosive athletes who flourish when allowed to charge forward and carry the ball into the final third.

Unburdening them from deeper defensive responsibilities, with three centre-backs behind them, allows them this freedom.

In front of the three centre-backs is a midfield double pivot. Galtier seems to have settled on a first-choice pairing of club stalwart Marco Verratti alongside new signing Vitinha, who had a spell with Wolves in the Premier League.

Verratti (averaging 83 passes per game) is given the responsibility to dictate the majority of play from a deeper position while Vitinha (52 passes per game) is often encouraged to push higher up the pitch and initiate combination play with the wing-backs and front three.

This midfield dynamic has ensured the front three are not disconnected from the rest of the team's build-up.

While PSG's wing-backs are allowed to get high up the pitch, Galtier also wants them to stay wide and focus on stretching the pitch to create space, rather than moving infield.

The positional freedom is afforded to the players inside of the wing-backs: Neymar, Mbappe and Messi.

The width provided by the wing-backs means that PSG's star attacking trio can now play closer to each other and combine.

All three players have immense technical quality, which has led to some mesmerising final-third moves.

Messi and Neymar now both have six assists each in the league this season - that places them as the top two assist makers from all of Europe's top five leagues.

The level of the trio's central combination play is so high that inevitably there are phases of play when the opposition defence are drawn in towards them. This creates space on the flanks for their rapid wing-backs to exploit.

This results in them picking up the ball in midfield areas and quickly launching accurate passes to find Mbappe's lightning-quick runs in-behind defences.

The other aspect of PSG's play that has changed with Galtier's tactics is their pressing.

Instead of asking the front three to cover large distances in Pochettino's previous 4-3-3, Mbappe, Neymar and Messi's off-ball roles are now confined to pressing opposition centre-backs and the defensive midfielder.

The pressing of the opposition full-backs is now left to the PSG wing-backs. This helps conserve the energy of the ageing Neymar and Messi for their on-ball activities, and also strengthens PSG's defensive structure.

Furthermore, if the opposition overloads a flank with two players, PSG can now fall back into a flat back five to enable the wing-back and wide centre-back to cover them, rather than asking Neymar and Messi to track all the way back into their own half.

Juventus' visit to the Parc des Princes on Tuesday will be Galtier's biggest test yet to see if their Ligue 1 performances can translate to the Champions League.

Galtier has provided the tactical structure for PSG's famous front three to combine. Now it is up to the individuals to perform.