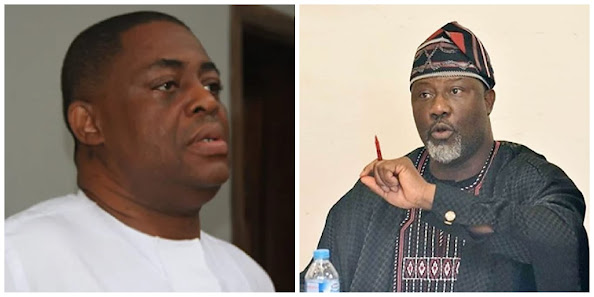 The rift between a former federal lawmaker, Senator Dino Melaye and the former Aviation Minister, Femi Fani-Kayode seems to have taken another turn as the duo continue to tackle each other via their social media handles.

DAILY POST reports that trouble began when Fani-Kayode, a staunch supporter of the presidential candidate of the All Progressives Congress, APC, Bola Tinubu reacted to Dino Melaye’s interview where he narrated how the Peoples Democratic Party, PDP, National Chairman, Senator Iyorchia Ayu was elected.

Dino, the spokesman of the PDP presidential candidate, Atiku Abubakar’s campaign, while commenting on calls for Ayu’s resignation, said, “All the PDP Governors spent money at our party’s National Convention to get Senator Iyorcha Ayu elected as National Chairman”.

FFK, a human rights lawyer, however, described Dino’s assertion as open confession, stressing that the said process of bringing Ayu as the party’s chairman was a criminal offence.

He said, “this is a grave and serious matter. It is a public confession of a criminal offence made by a senior figure within the PDP cabal that committed the said offence.

“It follows that Ayu’s election was a product of corruption and criminality and so was Waziri Atiku Abubakar’s as their party’s presidential flagbearer at a later convention which was conducted by him”.

But Dino, who was angered by Fani-Kayode’s observation, lambasted the former minister, describing him as a drug addict.

He said, “My attention has just been called to a statement issued by Femi Fani Kayode, which as usual, was an incoherent gibberish produced from his temporary relief from insanity.

“How can one explain his momentary consciousness to react to an interview long granted, if not that his world of reality is not in sync with the world of sound minds”.

This, however, did not go well as the former Minister took to his social media handles to rain insults on Dino.

Accusing Dino of being a coward, FFK said, “he was nothing more than a tout then and nothing has changed. Fat, ugly, balding, obese man, even at a relatively young age.

“What can one say about a man that just loves to li*k other men’s arse? Please stop behaving like a coward and weeing and defecating in your pants whenever trouble comes your way”.

DAILY POST observed that the two popular politicians are currently posting shaming words and motion pictures of their rivals on their handles.

Fani-Kayode did not spare the PDP presidential candidate, Atiku Abubakar from the insult, nor did Dino spare Tinubu from the war of words.