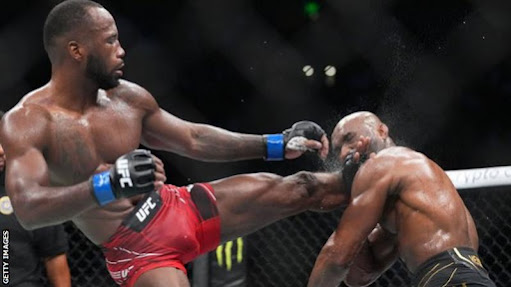 Behind on points in the fifth, Edwards, 30, landed a left high-kick to stun Nigeria's pound-for-pound number one fighter.

Edwards becomes the first British champion since Michael Bisping in 2016 and only the second in history.

"You all doubted me, saying I couldn't do it - look at me now," said Edwards.

"I'm from the trenches. I'm built like this. I've been doubted my whole life but look at me now."

In beating Usman, Birmingham's Edwards avenges his defeat in 2015 and ends the 35-year-old's 15-fight unbeaten streak in the UFC.

Jamaican-born Edwards, who was a big underdog with bookmakers going into the bout, extends his winning streak to 10 since the defeat by Usman seven years ago.

Usman won the first fight by using his wrestling to control the majority of the contest - a tactic Edwards says opened his eyes to weaknesses in his own grappling game.

Following that bout Edwards worked hard on his wrestling and the improvements made were evident from the start of the rematch.

In the first round he tripped Usman, becoming the first fighter in UFC history to complete a takedown on the Nigerian.

Usman responded strongly in the second and third rounds, pressuring Edwards with flurries of strikes and controlling much of the contest with his grappling.

At the end of the round Edwards' corner loudly urged their fighter to up his game and "get his hands moving".

Edwards started to show signs of fatigue in the fourth, brought on by the relentless grappling from Usman, as the champion landed an effortless takedown and continued to control the fight.

With Usman likely ahead on points going into the fifth, Edwards needed something special - and the Briton delivered.

With a feint he lured Usman's head to the side, before landing a clean left high-kick, leaving the Nigerian stunned on the canvas.

Edwards jumped on the cage in celebration as the enormity of what he had achieved started to sink in.

Commentator Joe Rogan said the kick which ended the fight was potentially the best he's seen in the UFC, with Edwards shocking Usman in the fifth while behind on points being arguably the sport's biggest ever upset.

"I was born in Jamaica with nothing - look at me now"

Edwards was born and raised in Kingston, Jamaica, before he moved to the UK at the age of nine.

His father was a leader of a gang in Jamaica, which meant Edwards was exposed to gang violence, including shootings, from a young age.

At the age of 13 Edwards' father was murdered, which pushed him into Birmingham's gang culture, before he eventually escaped via mixed martial arts when he joined a fighting gym four years later.

Training in MMA was the outlet Edwards needed to channel his energy into something positive, and his dedication showed as he rose through the ranks after joining the UFC.

Following victory over Usman, an emotional Edwards paid tribute to his mother.

"I was born in Jamaica with nothing. I lived in a wooden shed with a zinc roof. Look at me now, he said.

"All week I felt like this is my moment, everything in the past, the two years, the pandemic, look at me now, I'm champion of the world.

"Thank you Dana [White - UFC president], and to the UFC for giving an opportunity to a kid who was born with nothing, thank you."

Cameras showed Edwards in tears on a video call with his mum backstage following the fight, saying "I told you mum, I would do it" while further footage showed wild celebrations at his gym in Birmingham.

I can't do this any more - defeated Rockhold

Both fighters landed heavy shots throughout the bout, with Rockhold in particular fatiguing heavily as it wore on.

Former middleweight champion Rockhold, 37, who was competing for the first time in three years, appeared to confirm his retirement following the defeat.

"I've been through so much the last few years. Thank you UFC. I can't do this any more. I gave it my all, but I'm old," he said.

Dvalishvili's relentless pace wore Aldo down as he extended his winning streak to eight.

The win puts the 31-year-old in title contention for his team-mate and training partner Aljamain Sterling's belt.