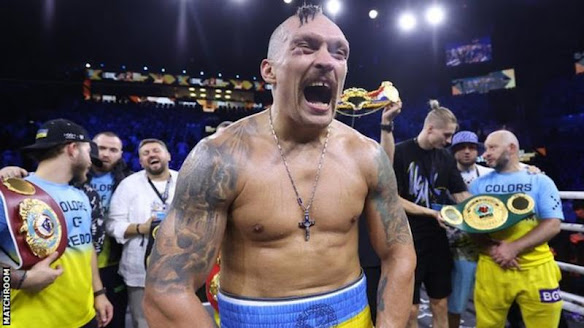 Ukrainian Usyk retained his WBA, WBO and IBF titles with a split-decision win over Anthony Joshua on Saturday.

This month WBC champion Fury said he would stay retired. After Usyk's win he said he "would annihilate them - get your cheque book out".

"He and Usyk would be a really good fight," Warren told BBC Radio 5 Live.

"It's a fight that I think will be made because both teams would like to see that happen."

Since 2007 the undisputed heavyweight championship has included the WBO title, and there has never been a fight where all four belts were on the line.

Warren said: "Usyk said after the fight that it's the only fight he's interested in, and it's certainly the same case with Tyson.

"It's just a matter of where it will generate the most income because it's a unique fight, a historic fight.

"It's the first time for God knows how long that the four belts are on the line. Both fighters are undefeated. The whole world of boxing will be captivated by this fight."

In failing to reclaim the titles he lost to Usyk in September 2021, Briton Joshua suffered a third defeat in his past five fights.

Although Joshua has now lost his belts, Warren said an all-British clash between Fury and Joshua could still happen "down the road maybe".

He said: "If AJ manages to get a couple of wins under his belt - and I believe Tyson will beat Usyk - that may be a fight to be made.

"But AJ's got to re-establish himself before you can even think about fights like that."