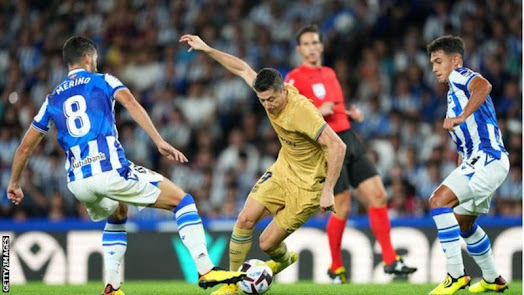 Ousmane Dembele's low drive made it 2-1, Lewandowski side-footed in a third and Ansu Fati calmly added a fourth.

The handsome victory was welcome following Barca's modest start to their campaign - a 0-0 draw at home to Rayo Vallecano.

Lewandowski joined Barca in the summer in a £42m deal from Bayern, where he only had one year left on his contract, while another of their new signings, Brazil's ex-Leeds United forward Raphinha, came on as a second-half substitute.

However, Barcelona were unable to field France central defender Jules Kounde as he has still not been registered because of financial reasons following his transfer from Sevilla at the end of July.

Barca are fifth in La Liga and play Manchester City in a friendly on Wednesday, with their next competitive game against Valladolid at the Nou Camp on Sunday.