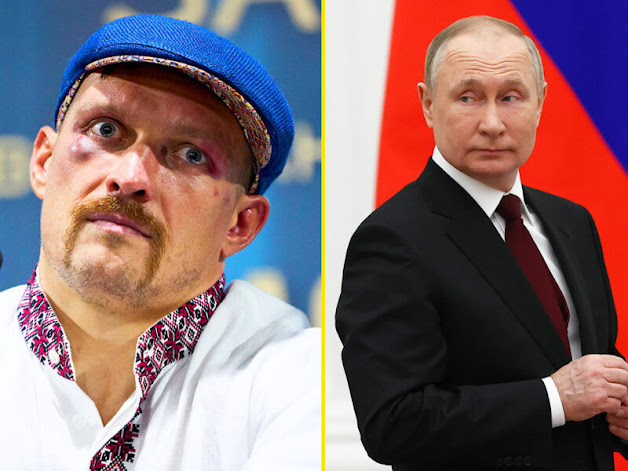 The Ukrainian, 35, dedicated his victory to his country as they continue to battle Russia's invasion.

Speaking after his points victory over Joshua, he said of Putin: 'Everything he shows is just to show that he's strong, but he's not. Otherwise, he wouldn't show how strong, how big he is. In reality, he is very weak.'

Usyk, who retained his world title belts with his victory in Jeddah, implied that victory was crucial for his country and ensuring that the world remains aware of what is happening across the country.

'This fight was extremely important for my country, my team, and for me. I boxed for the whole country and half of the world,' Usyk added.

'Now the whole world knows Ukraine is defending itself from the second biggest army in the world. And we stand strong and we give Russia a lot back.'

'I want to say that some people in the world are underestimating what is going on in Ukraine – please open your eyes and see what is happening. Ukrainians never give up, we always go to the end. We always win in the end, we just need a little more time,' he went on to add.

On Tyson Fury coming out of retirement to fight the winner of Saturday night's bout, Usyk opened the door for a potential December return to the Middle East.

'I am convinced he wants to fight me. That is what he is dreaming of every day,' Usyk said.