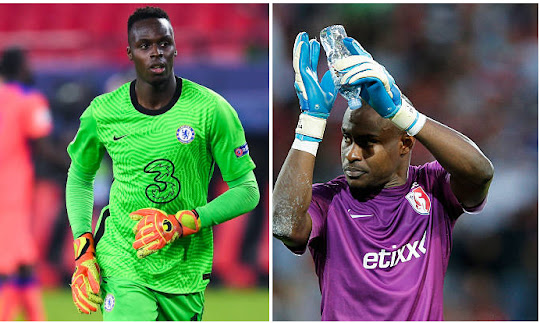 Chelsea goalkeeper, Edouard Mendy has named former Super Eagles captain Vincent Enyeama as one of the four greatest African goalkeepers of all time.

Mendy, who won the 2021 AFCON with Senegal in February 2022, says Africa has produced many gifted goalkeepers over time, but none can be compared to Enyeama, Ex-Senegal goalkeeper Tony Sylva, Cameroon duo of Thomas N’kono and Carlos Kameni.

“The greatest African goalkeeper of all time? I think that in Africa, we are lucky to have had a lot of goalkeepers marking their period,” Mendy said in an interview with Carré, a Cameroon Magazine.

“Goalkeepers love Thomas N’Kono, of course. But recently, we had Tony Sylva who is a true legend of Senegalese football.

“We had Carlos Kameni. We also had Vincent Enyeama.

“In several countries, we were lucky to have a lot of good goalkeepers. It is, therefore, very difficult to name just one.”

Enyeama started his career at Enyimba International and helped the Aba-based side to three consecutive league titles between 2001 and 2003. He also had a stint with Iwuanyanwu Nationale, Bnei Yehuda, and Hapoel Tel Aviv before making a big move to France.

Enyeama joined Lille in 2011, where he won the Prix Marc-Vivien Foé for the best African player in Ligue 1 in 2014.

He also enjoyed a successful spell with the national team. He made his Super Eagles debut in 2002, and went on to help the Nigerian national team to third-place finishes in 2004, 2006, and 2010 Africa Cup of Nations tournaments.