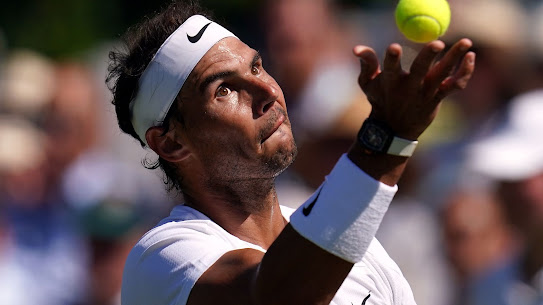 The 22-time Grand Slam champion beat Swiss Wawrinka 6-2 6-3 in an exhibition match at Hurlingham on Wednesday.

The 36-year-old's participation at Wimbledon had been in doubt because of a chronic foot injury.

"It has been a while without playing on grass," Nadal said.

He practised on the Mallorca grass courts after having treatment on his left foot before arriving in London on Monday.

Nadal has not played at Wimbledon since 2019 having missed last year's tournament to give his body time to rest following the French Open. The 2020 event was cancelled because of the Covid-19 pandemic.

"I am older now - I can't manage to play so many matches," Nadal said following his win over Wawrinka.

Nadal's last competitive match on grass was his 2019 Wimbledon semi-final against Roger Federer, which his long-time rival won in four sets.

"I don't know how he is feeling, it looks like normal Rafa," Wawrinka, who has been given a singles wildcard for Wimbledon, said.

"He has been saying he is feeling better and if he is playing he is ready to play his best and to win."