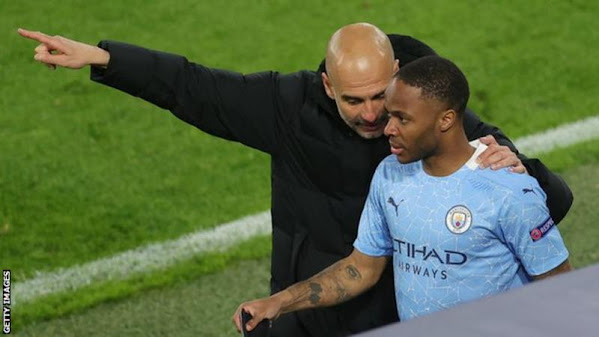 A month after coming off the bench to be a key figure in Manchester City's stunning comeback win over Aston Villa that earned him a fourth Premier League title - a ninth domestic honour since he left Liverpool to join the Blues in a £49m deal in 2015 - Sterling is contemplating whether that memorable encounter at Etihad Stadium will prove to be his final appearance for the club.

Teams in Spain have expressed an interest in the 27-year-old, while Chelsea are keen to bring Sterling back to his native London.

Sources close to the player say Sterling, who has a year left on his contract, has had no substantive talks with anyone about his future and is yet to make up his mind which way to go.

It is not a decision to take lightly.

Sterling is about to enter the peak years of his career and wants to get the most out of them. There is also a World Cup in November to consider for the man who was widely considered to be the star performer in England's run to the European Championship final last summer.

Despite the suggestion of his exit, there has been no fall-out with City boss Pep Guardiola.

Sterling recognises his manager, who arrived at the club in the summer after the England forward joined, has taught him a lot. His technical understanding of the game has improved beyond all recognition.

With 109 goals and 56 assists in 320 Premier League appearances, Sterling has confirmed his status as one of the most effective domestic performers.

By any definition, Sterling's time at City has been a success.

However, he does not want to become a bit-part player. He is still ambitious and believes he can be a significant figure in a club competing for the biggest prizes.

And this is where the dilemma lies.

But Erling Haaland's summer arrival from Borussia Dortmund appears to change the dynamic at City.

Having waited for so long and then, including all the additional elements beyond the actual £51.2m transfer fee, spent so much on a striker capable of what Guardiola calls "sniffing" the chances his side have failed to take at points over the past few seasons, it seems unlikely Haaland will not be a starter, especially in the biggest games.

Sterling was on the bench against Villa on the final day and in the two Champions League semi-final meetings with Real Madrid his contribution amounted to 28 minutes - all but seven of them after City had fallen behind in the tie and were chasing the game.

It is worth noting he started three games - including both against his former club Liverpool - in that mouth-watering four-game spell that also contained the two-legged Champions League quarter-final win against Atletico Madrid, so it is not as though Guardiola has been easing Sterling out.

But the England forward cannot feel confident of his place. And, one way or another, within the next 12 months he will commit to the deal that will probably define his career.

Real Madrid and Chelsea are the clubs mentioned most often around Sterling.

Having missed out on Kylian Mbappe, it is difficult to imagine the Spanish champions letting the summer pass without making an alternative "galactico" signing in attack.

Would Sterling fit the bill?

That is a matter of debate but he would fit into a team where Karim Benzema is turning in performances at a level that defies his veteran status.

Chelsea are likely to have a vacancy in attack given Romelu Lukaku's almost certain exit.

Sterling would not be a like-for-like replacement for the Belgian, but he was used as a false nine on occasions by Guardiola and Thomas Tuchel evidently prefers a more fluid attack than one with a battering ram at its head.

On the face of it, though, both clubs offer the chance to compete for the biggest prizes.

For Chelsea, however, there has to be a question mark until the new ownership works out its business model and what kind of transfer strategy it will employ, given it almost certainly will not involve losing £1.5bn as Roman Abramovich famously did.

The alternative is to remain where he is, which raises one of two options.

The first is to try to negotiate a new deal with City. Sterling is already very well paid due to the contract he signed in 2018 and the club's willingness to engage will be an indication of how much Guardiola wants him around.

The other option is to let his contract run out, which would see him become one of the most sought-after free transfers of 2023, when the lack of a fee will automatically drive his wage up.

As he continues on his post-season break - and thinks ahead to the start of a new campaign - Sterling has a lot to mull over.

One thing is for certain, whatever path he chooses, it will be big news.