Fabio Vieira: What can Gunners fans expect after agreeing deal for Porto midfielder? 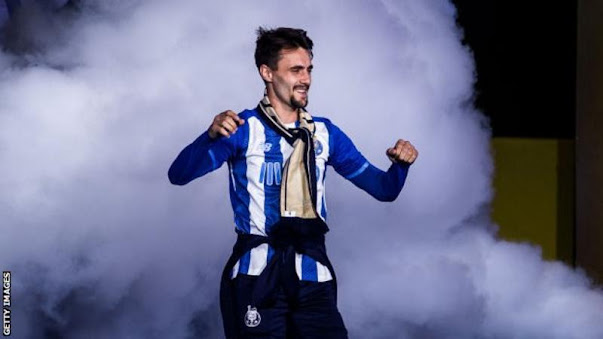 That is where fans gather to wait for players and coaching staff to celebrate triumphs together. It was no different in May after the northern giants were crowned Portuguese champions again.

For a second, though, one of the team's breakout stars, Fabio Vieira, feared he would not be able to join his colleagues on the big stage. A security officer had not recognised him and asked for his identification.

Vieira could not believe it. He had just finished the league campaign with six goals and 14 assists to his name and yet was being stopped at the party's entrance.

"Ma'am, that's me," he insisted, smiling, while being helped by a reporter from the club's TV channel with cries of "he's a player, he's a player".

The episode is telling of how fast things have happened for Vieira.

Last season was the first in which he enjoyed regular senior football and while it may not have been enough to establish him as an undisputed starter - or even for his face to become hugely recognisable in town - it was enough to convince Arsenal to secure a 40m euros (£34.2m) deal for the 22-year-old attacking midfielder.

"Players like Fabio are worth a lot of money, so if you can grab them before they fully break out, why not? That's smart business," Manuel Tulipa, a former Porto youth coach, told BBC Sport.

"He's that kind of creative midfielder who comes with the solution when you're struggling during a game. He can see what's going on around him and anticipate what will happen. That's the dream for any manager and the sort of footballer that clubs are always after."

With a left foot that oozes class, the boy from Argoncilhe, a suburb south of Porto, has been described as a rebel on the pitch.

He has self-confidence and, no matter the situation, refuses to play the obvious ball and pass backwards or sideways. It may sound risky, but the ball often ends up in the back of the net as a result.

It will now be up to Arsenal boss Mikel Arteta to harness that footballing intelligence and make sure he fulfils his potential.

'I have it all figured out'

Having arrived aged eight, the stylish midfielder spent all his formative years at Porto and yet his ride to the top was far from smooth.

His cousin and football coach Mara Vieira joined the club at the same time and even got to work by his side for a while, witnessing his journey through the ranks.

"We are talking here about a 12-year process to break into the senior squad and realise his dream of playing for his boyhood club," explained Mara, who is also an executive director at the School of Tactical Periodization. "Despite his quality, there were moments when he didn't play much and wasn't really appreciated by a coach or two.

"For instance, he only made it to the national setup at the under-18 level. He had to watch his friends being called up while he was left behind but he never doubted himself. He used to say he had it all figured out."

It may have taken longer for Viera to flourish than might have been expected, but once he did breakthrough he did not look back.

He was a key member of the Porto team that won the 2019 Uefa Youth League, beating a Chelsea side including the likes of Conor Gallagher, Billy Gilmour and Tariq Lamptey. Two years later, he was named best player at the Under-21 European Championship.

With Porto manager Sergio Conceicao's reluctance to embrace youth, Vieira had to wait for his chance to shine.

He finally became a regular after Luis Diaz's departure to Liverpool last winter, contributing to 11 goals in his final 12 league games. While it has been argued that he would have benefited from another season at the Dragao stadium, the club's never-ending financial crisis meant he left for less than his 50m euros (£43m) release clause.

A versatile player with an eye for a killer pass, Arsenal will be able to use him in a number of different ways.

He has featured across all positions in midfield, but mainly operated from the right flank, cutting infield. He is incisive in the attacking third and will provide fierce competition for Martin Odegaard.

"He has all the tools - he can dribble, combine, slow down the tempo, break into the box, score. Players like this have to be close to goal," said Tulipa.

"One thing he needed to improve, however, were his actions without the ball, but he did so over the past months. He has grown into a more collective athlete under Conceicao and found the right balance between the different moments of the game."

Adjusting to life in north London should be no problem for him, according to his cousin.

"It's a huge change, but, for everything he has gone through, his reading capacity and intelligence, he can overcome this, too," Mara concluded.