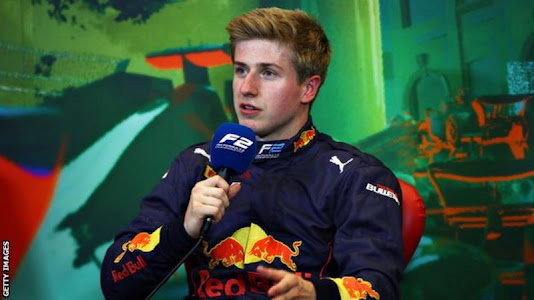 Red Bull said the 21-year-old Estonian would not conduct any team duties "with immediate effect, pending a full investigation into the incident".

He used a racist slur in a live-streamed game he was playing with fellow Red Bull junior Liam Lawson.

Vips also used homophobic language on a separate occasion in the same stream.

Red Bull said in a statement posted on social media: "We condemn abuse of any kind and have a zero-tolerance policy to racist language or behaviour within our organisation."

Vips, who races in Formula 2 and drove for Red Bull in first practice at this year's Spanish Grand Prix, later apologised on his Instagram account, saying: "This language is entirely unacceptable and does not portray the values and principles I hold.

"I deeply regret my actions and this is not the example I wish to set. I will co-operate with the investigation fully.".

Lewis Hamilton has been at the forefront of F1's attempts to increase diversity and inclusion in recent years.

The seven-time champion has set up his own commission to look into the root causes of the lack of minorities in motorsport, and to promote inclusion in science, technology and mathematics subjects in education.

Earlier this month, Hamilton and four-time champion Sebastian Vettel vowed to continue to speak out on these and other important issues after the new president of F1's governing body the FIA, Mohammed Ben Sulayem, questioned whether drivers should air their views on such topics.

F1 launched its own campaign promoting diversity at the start of the 2020 season and has a programme which lasts until 2025 aiming to support students from under-represented backgrounds through university.

In addition, a number of the teams have launched their own diversity programmes.