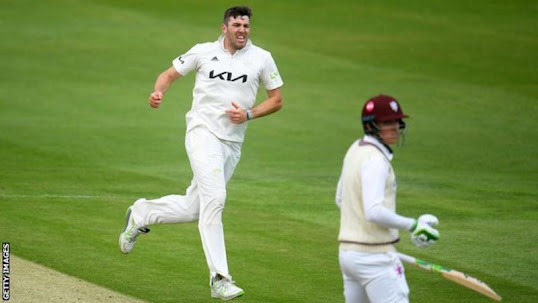 Surrey's Overton, 28, replaces James Anderson, who misses out with an ankle problem.

He was named in the squad alongside his twin Craig. Though Craig is not playing, the Overtons will still become the first twin brothers to play Test cricket for England.

Ben Stokes is fit to lead England after recovering from illness.

The all-rounder missed training on Tuesday, but returned on Wednesday and will play in a Test at Headingley for the first time since his match-winning heroics in the 2019 Ashes.

"I'm all right, just a bit under the weather the last few days," Stokes told BBC Sport. "I've played sick before, so I'll be fine."

The 39-year-old bowled on the square at Headingley on Wednesday and will now work towards being fit for the rescheduled fifth Test against India at Edgbaston, starting on 1 July.

Asked if Anderson will be available for that match, Stokes replied: "I don't want to say yes, but I'm not saying no. I'd rather have a 100% James Anderson for the game against India than play Jimmy twice at 75%."

Jamie Overton, capable of bowling in excess of 90mph, makes his Test debut five years after Craig, who has won eight caps.

Though they miss out on becoming the first brothers to play in the same Test for England since Adam and Ben Hollioake in 1997, they do become the first twin brothers to represent England.

"Jamie comes in for Jimmy, even though they play completely different roles," said Stokes. "To have someone come in and change the game in the way that he does, bowl fast and aggressive, is exciting."

England already have an unassailable 2-0 lead after a stunning victory in the second Test at Trent Bridge, where Jonny Bairstow's blistering century saw them chase a target of 299 by scoring at almost six runs an over.

The two wins over New Zealand, after a run of only one win in their previous 17 Tests, have come as England showed a fresh attitude under new captain Stokes and coach Brendon McCullum.

"My message is clear and simple," said Stokes. "Let's try to progress from what we did at Trent Bridge. It's hard to put into words how we do that this week, but I said 'let's feel like we're in the entertainment business and not the sports business'.

"I feel like people want to come and watch the brand of cricket we're playing. My challenge to the lads this week is to go and do it again."

The Test at Headingley comes a week after Yorkshire and a number of individuals were charged by the England and Wales Cricket Board over allegations of historical racism.

Yorkshire were initially suspended from holding international matches in November, only to have their fixtures restored in February after demonstrating to the ECB they had fulfilled certain requirements.

"We've got a responsibility with what we do out on the field to attract people, but we also know we are role models off the field as well," said Stokes.

"All we can do is go out there and perform to our abilities. Hopefully we can attract a new fanbase with what we do out there."

New Zealand captain Kane Williamson, who has played for Yorkshire, added: "It's been incredibly sad to see what has unfolded and I can only hope that something positive comes out of it. There is no place for racism or discrimination in sport or in society."

Williamson returns for the Black Caps after missing the second Test with Covid-19. Batter Devon Conway and all-rounder Michael Bracewell are also available after testing positive between matches.

Fast bowler Kyle Jamieson has left the tour with a back problem, with fellow paceman Neil Wagner and spinner Ajaz Patel vying for selection.