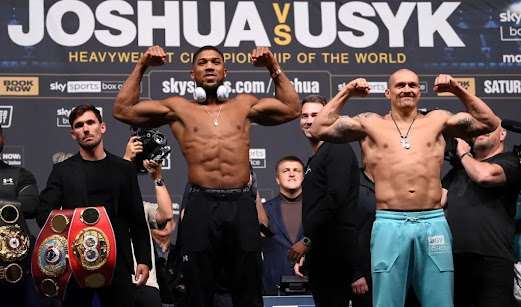 Joshua came face-to-face with Usyk for the first time since losing his WBA (Super), IBF, and WBO titles in London in September.

At a media conference, Joshua was full of confidence as he aims to become a three-time world champion.

"You can put me down, but it's difficult to keep me down."

The press event in Saudi Arabia was heavily saturated with praise for the host country, which has faced accusations of human rights violations and is currently launching a military operation in Yemen that has caused a humanitarian crisis.

Joshua, who praised members of the Saudi royal family in his first answer, had his new head coach by his side, Robert Garcia.

The switch of trainer is one of many changes the Watford-born fighter says he has made for the rematch.

"In the fight in September, I was wrong and he [Usyk] was right," said Joshua who added that he had to "take that defeat like a man as well, I have to be accountable".

He added: "Definitely the hunger is still there. Blips happen, things happen in life, but resilience, mental toughness and consistency will always prevail."

Usyk has spent time in Ukraine helping the war effort against Russia and earlier in the summer it appeared the rematch would have to be postponed.

But the 35-year-old Ukrainian was given permission to leave the country in March to train for his second fight with Joshua.

Unbeaten in 19 professional fights, Usyk did not say much, only that he was fighting for Ukraine.

"We are not in the best conditions at the moment back home [in Ukraine]," he said.

"I never made some very loud and bright speeches, all I did was just work hard in my training camp, my gym, that's what I'm going do until the date of the fight."

No tough questions this time around - analysis

Unlike at press conferences for the recently-launched Saudi-backed LIV Golf tour, there were no hard-hitting questions here from journalists around the country's reputation.

Greg Norman, LIV Golf's chief executive, was grilled last month about accusations of so called 'sports washing', and the murder in 2018 of dissident Saudi Arabian journalist Khashoggi at the Saudi consulate in Istanbul.

On Tuesday, the Saudi Arabian flag was beamed out to viewers for the opening of the broadcast and the first 20 minutes spent promoting the country's work in boxing.

Saudi Arabia has now spent billions to bring elite sport to its country.

Boxing has never denied it was lured to Saudi Arabia in 2019 by the money on offer, with Joshua's promoter Eddie Hearn saying at the time: "Let's not kid ourselves, don't you think any promoter wants to go wherever the most money is for their fighters, and that's what we're doing."

This time Joshua is reported to be earning £100m.

Usyk wore a 'colour of freedom' T-shirt for his media duties beforehand, but was not wearing the pro-peace top for the live broadcast. Saudi Arabia's military activities in Yemen have been criticised globally.

It is among the countries that carries out the most executions, women's rights activists have been jailed and political parties, trade unions and independent human rights groups are banned.

And as boxing heads to Saudi Arabia once more there are sure to be tougher questions in store for the fighters and promoters.