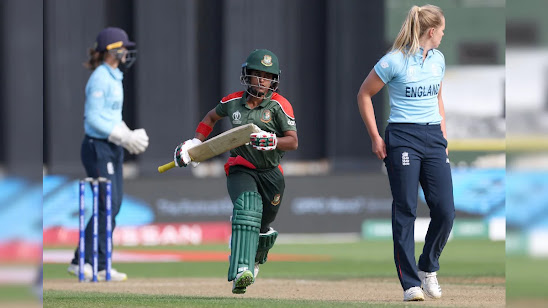 The 100-run success at the Basin Reserve continued a strong resurgence from the defending champions, who have won four successive matches after beginning the tournament with three straight losses.

On a tired surface, England started with circumspection against a hard-working Bangladesh attack, at one stage finding themselves 96-4.

They were lifted to 234-6 by Sophia Dunkley, who made 67 with support from Amy Jones and Katherine Brunt.

Bangladesh, playing the final match of their first World Cup, never showed any serious intent in the chase.

Spinners Sophie Ecclestone and Charlie Dean took three wickets each as Bangladesh were dismissed for 134.

England will play South Africa in the last four in Christchurch on Thursday (02:00 GMT), a repeat of the meeting between the two teams at the same stage in 2017.

Australia play West Indies in the first semi-final in Wellington on Wednesday (23:00 GMT on Tuesday).

Two weeks ago, when England suffered a demoralising defeat by South Africa, the idea of having their fate in their own hands going into the meeting with Bangladesh was a best-case scenario.

Once victories over India, New Zealand and Pakistan were completed, it never seemed likely that Bangladesh would pose a great threat, even if they did give a fright to Australia on this ground two days ago.

Indeed, in their first one-day international meeting with Bangladesh, England had complete control for the majority of the contest and head to the semi-finals with the momentum of four successive victories.

Along with the win needed to guarantee their progress, England may have been mindful of keeping their net run-rate high enough to avoid a last-four meeting with unbeaten Australia.

However, a full-throttle approach with the bat was made difficult by the worn pitch, and England needed to take care in the early stages before late impetus from Dunkley, Brunt and Ecclestone.

The target of 235 was more runs than Bangladesh had ever made in a one-day international, so the result was not in doubt at the interval.

In the end, India's defeat by South Africa later on Sunday ensured net run-rate did not come into the equation and, with England finishing above West Indies, it could prove vital to be kept apart from Australia in the semis.

England were boosted by much-needed performances by Brunt and Danni Wyatt in the win over Pakistan, and in Wellington it was the turn of Dunkley to prove her worth.

When Nat Sciver fell for a fluent 40, England were four wickets down after 26 overs and flirting with danger.

But Dunkley batted with intelligence and composure, adding 72 with Jones, who made 31. When the time came to accelerate, England were able to take 79 off the final 10 overs - an impressive rate of scoring given the conditions.

The pitch seemed ideally suited to England's spinners, and left-armer Ecclestone in particular was superb with her accuracy and bounce.

Off-spinner Dean underlined her status as England's find of the tournament, while seamer Freya Davies, in for the rested Anya Shrubsole, picked up two wickets on her World Cup debut.

Veteran pace bowler Brunt delivered only five overs because of tightness in her back, but is not thought to be a doubt for the semi-finals.

England captain Heather Knight: "I'm really pleased, I probably would have liked a few more runs, 250/260, but the wicket was very slow. And we were clinical with the ball.

"The batters have all had a little time out in the middle to get used to the conditions here.

"It says a lot about this group, the way we've turned things round. Not getting too down, we were on the wrong end of a few close ones. I'd have certainly bitten your hand off a few weeks ago to be in this situation."

Bangladesh captain Nigar Sultana Joty: "I think we need to play more matches. I think we will learn more. We were coming to explore, to get a lot of experience.

"We want to take all the positives from here. Back home a lot of young girls are coming into cricket and I think after the World Cup I think there'll be more."