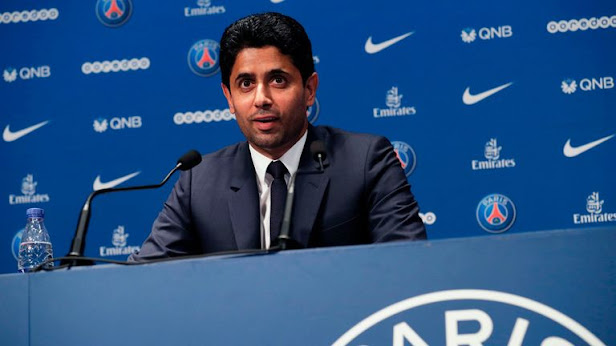 Paris Saint-Germain president, Nasser Al-Khelaifi stormed the referee's dressing room and broke equipment after his side were knocked out of the Champions League by Real Madrid, according to the referee's report and verified by multiple reports including ESPN.

The first of Benzema's three goals enraged PSG, who felt Benzema should have been called for a foul on goalkeeper Gianluigi Donnarumma in the build-up.

Al-Khelaifi's outburst was documented in the referee's report, which also stated that PSG director of football Leonardo was alongside him.

Al-Khelaifi and Leonardo "behaved aggressively and tried to enter the referee's dressing room," according to the report. "When the referee asked them to leave, the president hit a piece of the assistant's equipment, breaking it."

The ESPN report states that a source says they had "never seen club executives behave like that."

According to Spanish publication Marca, Al-Khelaifi's behavior was recorded by a Real Madrid employee possibly club delegate Mejia Davila, whose office Al-Khelaifi initially, mistakenly entered first who will likely send the footage to UEFA to study for a possible punishment.

After the match, PSG manager Mauricio Pochettino said: "To concede the goal that we concede, the VAR has given the goal...It's unbelievable. "It's impossible to accept because it was a clear foul."

"Overall we were the better team, and it's so disappointing when the emotion of the game changed from this type of situation. It's difficult because you have given Real Madrid the belief, and of course it was so difficult to manage this situation because the team was so affected, and it's so unfair to talk about different things because that changed completely the way the game was."