Italy 0-1 North Macedonia: 'We are destroyed and crushed', says Giorgio Chiellini as it ended in premium tears for the Italians after kissing goodbye to the FIFA World Cup #UberTalksSport 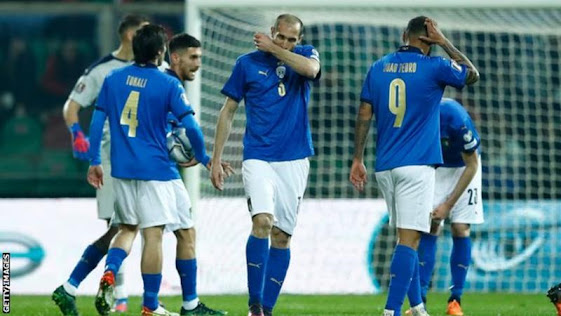 The European champions will miss their second World Cup in a row after also failing to qualify for Russia 2018.

"A great void will remain within us," said Juventus defender Chiellini.

"We didn't concede anything tonight apart from the goal. We created plenty of chances, but unfortunately we didn't manage to score. There is a great disappointment. From September to today we have made mistakes and we have paid for them.

"I am proud of a team that has given everything. It is clear that we are destroyed and crushed. We hope that this void will give us the push to start again."

Italy boss Roberto Mancini guided his nation to European glory with victory over England in the final of Euro 2020 in July, a career highlight for a manager whose team had been considered outsiders going into that tournament.

But the Azzurri finished runners-up to Switzerland in their qualifying group after a disjointed campaign and defeat in the play-off with North Macedonia now means the European champions will endure at least 12 years between appearances at football's showpiece event.

"This summer I had my greatest joy and today is the biggest disappointment," said Mancini. "It's hard to speak.

"I'm really sorry for the players. It's a team that has played very well and who won the Euros last summer by deserving it. I'm really sorry that they can't go to the World Cup for the second time.

"That's football. When you lose, you have to suffer and remain silent, there is nothing to do.

"It's difficult to comment on a match where we shot perhaps 40 times on goal [32 times] without scoring, and suffered a goal in the 92nd minute. That's how it is.

"The players have a great future, they are strong and have a future with the national team. It's a difficult moment, and it will be in the next few days. It's the law of football."

Asked about his own future, Mancini added: "Now it is too early to talk about the future. We still have to digest this defeat.

"On a human level, I can say that I love these lads more tonight than after the triumph in July. The disappointment is enormous."

Italy's Chelsea midfielder Jorginho accepted some responsibility for the result, saying: "It's a huge disappointment. It hurts so bad. I believe we played well, because we controlled and dominated the match but we have not been able to finish. It is not to blame anyone but it is the reality.

Italy midfielder Marco Verratti added: "It is hard to understand what happened, because it is a great disappointment. Their goal in added time was a real nightmare. This group had a great chance at the World Cup, so it is difficult to accept what happened tonight. We all know that we have given everything, now surely it is time to ask ourselves some questions."

The result means Italy, who only lost their remarkable 37-game unbeaten run in October, are only the fourth team to win the Euros and then fail to qualify for the next World Cup, following Czechoslovakia, Denmark and Greece.

Analysis - 'Italy have had a nightmare in the qualifiers'

It is incredible when you watch this team that won the Euros with this new style of football and refreshing youngsters on the pitch - and now they have had a nightmare in the qualifiers.

Twenty-seven shots against Bulgaria, they missed penalties in both games against Switzerland and 32 shots to four against North Macedonia. This is a team that takes 1,001 shots but is lacking a number nine worthy of their play.

Italy were a side that was compact and known for always being in the game and having some swagger, but today we saw a young side who didn't seem to impose themselves on the game. Lorenzo Insigne is a big player but as the going got tough, he wasn't there. Neither was Ciro Immobile, who was overthinking every kick.

'We know our strengths'

For North Macedonia, the barely believable prospect of reaching a second consecutive tournament is now only 90 minutes away.

They qualified for Euro 2020 via the Nations League, and if they can upset the odds again on Tuesday when they face Portugal they will be able to look forward to a first World Cup appearance.

And while Italy dominated, the home side rarely troubled keeper Stole Dimitrievski, with the home side having only five shots on target.

"I am very happy for [Aleksandar] Trajkovski with his goal," said manager Blagoja Milevski. "The game was prepared in this way, we know that Italy are a great team with several champions but we played as we should.

"We know our strengths. Before the game I told the guys to have fun and they did just that."

That sentiment was echoed by captain Stefan Ristovski, who said he was still in "shock".

"I am overjoyed with the victory and I expect a great welcome on my return to North Macedonia," he said.

"Can we beat Portugal? Yes, we will win. We will do everything to win and we will do it."