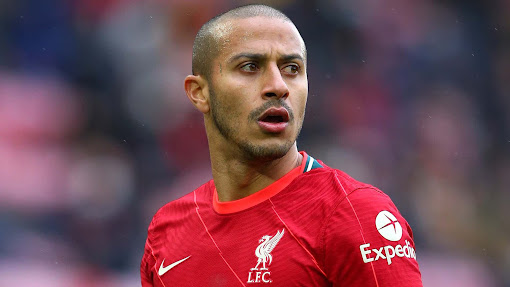 Thiago Alcantara claims to be paying no attention to the speculation suggesting that he could be lined up by Barcelona for a return to Camp Nou, with the Liverpool midfielder fully focused on events at Anfield.

The Spain international is a product of the famed La Masia academy system and made his senior breakthrough with La Liga heavyweights alongside current Barca boss Xavi.

A reunion in Catalunya is now being mooted, with Thiago yet to make the expected impact in English football, but he has shrugged off talk of making a January move away from Merseyside.

What has been said?

Quizzed on the Barca links ahead of a Champions League clash with Porto on Wednesday, Thiago told reporters: “I play football. I'm not concerned about rumours.

“I'm focused on the duty I have to my team, the contract I have and the new adventure I have here in the Premier League trying to win all the trophies I can.”

Thiago or Phillips - choose one 👇 pic.twitter.com/3e7EmEDzYD

Thiago has been with Liverpool since the summer of 2020, when he linked up with the Reds in a cut-price deal after entering the final year of his contract at Bayern Munich.

Pressed on whether that was the right career call, he said: "100 per cent, I made the right choice, the right move.”

Big things were expected of a classy playmaker in the Premier League, but niggling injuries have stunted his progress.

He has taken in 38 appearances for the Reds, but various ailments have forced him to sit out 34 more.

Thiago has come back into contention over recent weeks, as a deaf ear is turned to the transfer talk, and he is hoping to enjoy an extended run without paying a visit to the treatment room.

He added on his fitness problems: “We tried to avoid all the injury situations with hard work and our daily routines and we changed some things to make that not happen.”

Liverpool will play host to Porto in midweek with a spot in the last-16 of the Champions League already safely secured, meaning that Jurgen Klopp can shuffle his pack and get minutes into those on the fringes of his fold.