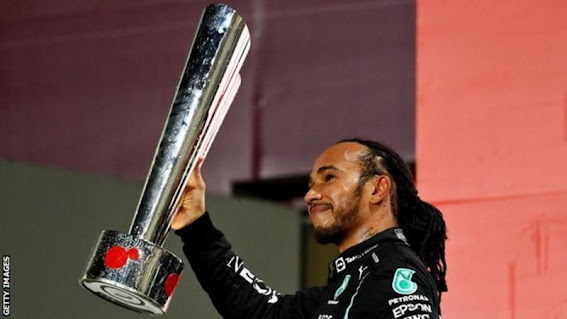 Lewis Hamilton's second win in succession, in a largely dreary Qatar Grand Prix, has left the Formula 1 championship battle on a knife-edge heading into the final two races of the season.

A comfortable win from a dominant pole position was Hamilton's seventh of the year and reduced the Mercedes driver's deficit to leader Max Verstappen of Red Bull to eight points.

Neither driver is in a comfortable position.

Mercedes have been on the back foot for much of the season. But the trend line of performance in the last three months favours them, and an eighth title is very much within Hamilton's grasp.

At the same time, though, the advantage still lies with Verstappen. He also drove superbly in Qatar, to fight back from a five-place grid penalty and finish second, and the Dutchman can clinch his first championship in Saudi Arabia in two weeks' time if results go his way.

A win and fastest lap for Verstappen on the new Jeddah street circuit and Hamilton would need to finish fifth to keep the championship alive. Even if the Briton was second, Verstappen would head to the final race in Abu Dhabi with a lead that realistically could not be overturned unless he hit trouble.

But a win for Hamilton in Saudi Arabia with Verstappen second would set up a winner-takes-all showdown at Yas Marina.

'They woke the lion in Lewis'

With the season so finely poised, perhaps it's no wonder tempers have frayed in recent days.

Mercedes Formula 1 boss Toto Wolff said after Hamilton's win on Sunday that his disqualification from qualifying at the previous race in Brazil, which led to the 36-year-old producing one of the drives of a lifetime to recover 25 places over one and a third race distances to win, had "woken the lion".

"He is absolutely on it," Wolff said. "Brutal. And cold-blooded. This is the best in Lewis, and we have seen it in the past and he is right there.

"When adversity happens, then it takes him to a place where he is able to mobilise super-hero powers. And it was the adversity that triggered that in Interlagos."

There was more provocation for Mercedes in Qatar, with the complaints from Red Bull about the legality of their car turned up a notch, if anything, even from Brazil.

But in the end Red Bull's outspokenness, casting aspersions on their rivals and on the officials, caught them out.

After Verstappen was given a five-second grid penalty for ignoring double waved yellow caution flags in qualifying, his team boss Christian Horner gave a contentious interview which was a step too far for governing body the FIA, and he was hauled before the stewards to explain himself.

Pressure ramps up off track

Out on track, Hamilton was serenely above all this. His pole position was one of his most emphatic of the year, and once Verstappen had been demoted to sixth on the grid, all Hamilton had to do was make sure he made it into the first corner first, and the win was pretty much in the bag. And that's exactly what happened.

Demoted to seventh, Verstappen was fourth by the first corner and second by lap five. But he had no answer to Hamilton's pace in that first stint.

After that, Mercedes simply mirrored Red Bull's strategy and Hamilton managed his pace to keep Verstappen about eight seconds back for the rest of the race. "No problem," Hamilton said.

Behind them, the race was enlivened by a series of punctures that afflicted four cars and caused one of their victims, McLaren's Lando Norris, to become the latest driver in a long line to question the integrity and quality of Pirelli's tyres; and by Fernando Alonso's marvellous drive to third place in the Alpine.

It was the Spaniard's first podium since the 2014 Hungarian Grand Prix and it crowned what has been an increasingly impressive comeback after two years outside F1. He could be forgiven, therefore, for uttering an expletive on live television afterwards. "I was waiting so long for this," he said. "I am happy."

Compared to Hamilton's dazzling fightback in Brazil, the sporting action was somewhat lacking in Qatar, much as the drivers enjoyed the high-speed corners on the track's debut on the F1 calendar.

Off track, though, is another matter.

Through the weekend, Horner gave a series of interviews casting doubts on the legality of the Mercedes rear wing, demanding something be done about it, and having a pop at Wolff.

On Friday, the pair engaged in tense and bad-tempered news conference, in which Horner repeated his accusations that Mercedes' straight-line speed advantage in Brazil was "not normal", threatened to protest the car if Red Bull saw again what they believed to be an illegal rear wing, and accused Wolff of being affected by the pressure.

One team boss not involved in the title fight has described Horner's claims as to the speed off-set between Hamilton's car and the others as he came through the field at Interlagos as "the usual Red Bull BS".

Mercedes feel the same way, say the speed differences like for like were nothing like as big as Horner says, and reject out of hand the idea that there is anything wrong with their wing.

Horner was mollified by what he said was a reversion to a more normal situation in Qatar, but Red Bull's concerns have not gone away - they've just been shelved pending developments in future races.

Red Bull's accusations centre on their belief that the main plane of the Mercedes rear wing has been flexing backwards above a certain speed, reducing drag. The believe scrape marks on the wing end-plates prove this. And Verstappen even says they have video evidence. But there has been no protest as yet.

Wolff says Red Bull are "seeing ghosts". And governing body the FIA introduced a new load test in Qatar to check this out. It had no regulatory value; it was part of trials the FIA are running ahead of next season. But the Mercedes wing - the same one they used in Brazil, they say, unchanged - passed it easily.

But watch this space - the Saudi track is characterised by long straights, and Mercedes are expected to put back in Hamilton's car the new engine that he used in Brazil, but which was not fitted for Qatar.

What wrong with Red Bull's wing?

Meanwhile, there was something amiss with the Red Bull wing. The top flap was oscillating when the DRS overtaking aide was open in practice, a problem that first occurred at the US Grand Prix four races ago, and recurred in Brazil.

Red Bull have tried to repair it each time, but in Qatar they took that wing off the car and ran one of a different design, which produces more downforce.

The wing that ended up on the Red Bull is their maximum-downforce wing, the one used at Monaco and Mexico. The one they took off was the one they use at tracks that require slightly less downforce, such as Barcelona and Portimao.

Losail is not obviously a track that requires absolutely maximum downforce, so some suspected this might have hurt Red Bull's competitiveness in Qatar. But Horner insisted not.

"As it turned out, it was our preferred wing," he said, "the set-up direction we wanted to go in."

Horner did admit, though, that they still had to get to the bottom of the problem with the other wing.

"If those other wings are required in Jeddah or Abu Dhabi," Horner said, "we will need to have fixes in place to strengthen the DRS mechanism."

Amid this torrent of accusations from Red Bull, it was ironic that Horner himself ended up in hot water with officials.

When Verstappen's penalty was announced on Sunday a couple of hours before the race, Horner went on television and blamed the yellow flag on a "rogue marshal".

The FIA was not happy, and they hauled him before the stewards charged with breaking a rule that forbids "any words, deeds or writings that have caused moral injury or loss to the FIA... or its executive officers, and more generally on the interest of motorsport".

He was given an official warning, and forced to issue an apology to the marshal via the media.

To add to the irony, given what he had said about Wolff 48 hours before, the verdict revealed that Horner had said "his reaction was one that was made under the pressure of competition".

In the news conference he called to issue this apology, it was pointed out to him that in recent days he had accused Wolff of buckling under the pressure, criticised FIA officials, and effectively accused Mercedes of cheating. Did he have any regrets about the way he had conducted himself, he was asked?

"No not at all," he said. "I believe in my team. I am a straight-talker. I have always conducted myself in that manner. I am not an overly emotional person. I don't rant to cameras.

"I think the way I've conducted myself, I've got no issues with. I'd do exactly the same [again]. The only issue regarding any marshal, was if there was any personal offence taken for referencing a rogue yellow flag; [it] was not intended at any individual.

"I don't know whether you heard the interview I gave this morning, but I don't think it was unreasonable."

What do the drivers think?

The final two races are on consecutive weekends at the start of next month, on a new street track in Jeddah on 3-5 December and the revised Abu Dhabi circuit on 10-12 December.

The pendulum has swung so much this year that it's impossible to predict what might happen. Five races ago, they left Turkey with Verstappen leading by six points. Since then, his lead has gone up to 19 points, and is now back down to eight.

As a trend, the Mercedes has been slightly the faster car since the British Grand Prix in July, at least in qualifying. But as recently as Austin and Mexico last month, Red Bull had a decisive edge.

"The feeling is good," said Hamilton. "I'm really, really happy with the car. I feel fit. Fitter than I've ever felt, so that's a positive.

Verstappen said: "So far, we've done an amazing job as a team compared to the previous year when they were so dominant and so fast. So for us to even be in this fight I think is very impressive.

"We're not going to give up. Clearly this weekend we lacked a bit of pace but every race weekend is different. Of course I know it's going to be difficult to the end but I think that's nice. It keeps it exciting."