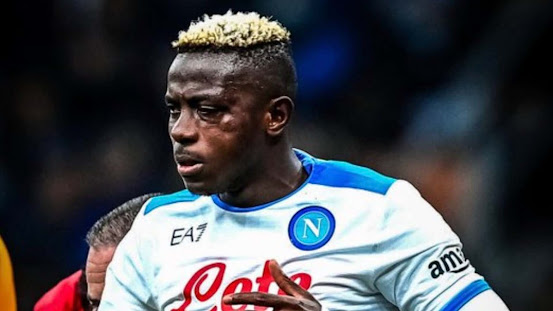 The 22-year-old is now expected set to spend at least three months on the sidelines, meaning he will play no part in the African football showpiece

Nigeria have been dealt a major blow as Victor Osimhen has been ruled out of the 2021 Africa Cup of Nations through injury.

The youngster was forced off injured during the Parthenopeans’ 3-2 Serie A defeat to Inter Milan on Sunday evening at the Stadio Giuseppe Meazza.

Following a clash of heads with defender Milan Skriniar, he could not complete the game and was replaced by Andrea Petagna four minutes before the hour mark.

The Italian top-flight side, in a statement published on their website, has since revealed how long the former Wolfsburg and Lille player would spend on the sidelines.

“On Tuesday morning, Victor Osimhen was operated on his cheekbone and eye socket by Gianpaolo Tartaro, who was assisted by Dr Mario Santagata with Dr Raffaele Canonico also present,” it read.

“Titanium plates and screws were used in the operation. The player is doing well and will remain under observation for the next few days.

“Osimhen is expected to return to action in three months.”

If this is anything to go by, Osimhen will not be ready as Gernot Rohr’s side bids to win the biennial African football showpiece for the fourth time in Cameroon.

The Lagos-born striker played a key role in Nigeria’s qualification for the 2022 Fifa World Cup play-offs. Aside from his exploits in Italy, he has scored nine goals in his last ten matches for the three-time African Champions in all competitions.

Also, he will miss at least 16 Serie A fixtures for the Naples-based team – starting with Sunday’s showdown at Lazio.

Before the showdown against Inter, legendary defender Giuseppe Bergomi warned the Black and Blues to raise their defensive line when they come face to face with the African star.

“That the whole department can go into crisis due to Osimhen's revs. They will have to raise the defensive line and there, in those spaces, he can hurt,” Bergomi said as quoted by Stylo24.

“On the other hand, he [Osimhen] just needs a long throw that he leaves and you don't catch him anymore. I still remember that at the beginning Spalletti told me that he still had to grow, but now I see that he has found sensitivity in playing the ball on the ground.

“Osimhen. It is one that allows you to play with even lower defence, because when you throw it and go. Like Inter did last year with Lukaku.”