No place to hide: Man Utd players have no excuses now Solskjaer's gone 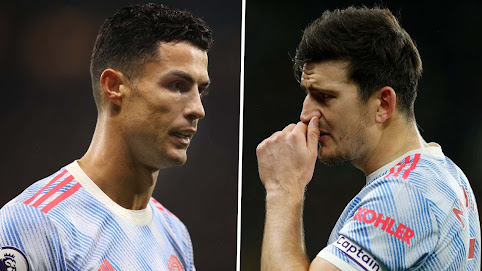 The Red Devils' squad costs around £88.5m in wages every quarter, but performances have been disappointing over the course of the season

As the Watford players celebrated their second goal in front of the Rookery End, the Manchester United players trudged back to the centre of the pitch with their heads down.

There was no fight, no encouragement, no motivation from captain Harry Maguire. Their heads had gone.

When the full-time whistle was blown on Saturday, it was obvious that Claudio Ranieri’s side had put the final nail in Ole Gunnar Solskjaer’s coffin.

As the Norwegian walked over to the away end, he put his hands up in apologetic fashion and then waved goodbye. He must have known that it was likely to have been his last act as Manchester United manager.

Shortly behind him was Bruno Fernandes. The Portuguese talisman was annoyed by a section of the United support who were booing the manager.

He gestured with his arms, suggesting that they should be blaming the players and not Solskjaer, and had to be pulled away by Fred.

Fernandes was right though. The players do need to take part of the blame.

Yes, there were problems. There were questions over Solskjaer’s tactics and game plans but some of the performances over the past few weeks have been abysmal.

After the defeats against Leicester, Liverpool and Manchester City there was a common theme - the players who fronted up said they needed to look at themselves and do better.

Yet they consistently failed to do that.

“The players need to take responsibility for everything, on and off the football field, we’re the ones that cross over the white line,” Maguire said on Tuesday.

“We know it’s football, we were in it together, we were a group, the manager and the players. Ultimately the manager has paid the price and we’re all so disappointed for that.

“We take huge responsibility, we know we haven't been good enough, we know that individually and collectively as a team, we know that and we spoke about that.

“Now we have to look forward and try to get the club back to where it should be. The last few months have been nowhere near good enough.”

Solskjaer has gone but is there anything to suggest that the players are suddenly going to improve?

It is understood a number of players were surprised at the decision to keep Solskjaer’s core coaching team of Michael Carrick, Kieran McKenna and Mike Phelan at the club.

It was Carrick and McKenna who took training sessions while Solskjaer was in charge so not much will change on that front, at least initially.

Former midfielder Carrick, who has taken interim charge for an unspecified amount of time, suggested that little will change under him.

“I worked closely with Ole for a long time now and we do have very similar beliefs,” he said.

“We did as players and we certainly do as coaches and managers.

“That's why we worked together for so long and it went so well for a period of time, so we'll have to wait and see,” he said.

With little expected to change in terms of training and tactics it’s over to the players to step up but that is something they have been incapable of in recent weeks. Their displays have not been good enough.

The accounts showed last week that this is a squad whose wages make up an £88.5m ($118m) quarterly bill.

That figure has increased by 23 percent in the last three months due to the return of Cristiano Ronaldo and the signings of Jadon Sancho and Raphael Varane.

But there are doubts over whether the club is getting value for money.

They’ve lost seven out of their last 13 matches in all competitions, have kept only two clean sheets in the last 25 games and sit eighth in the Premier League table - already 12 points off league leaders Chelsea after only 12 games.

The results can be blamed on Solskjaer but, as individuals, they have been failing for weeks.

“As a manager you know you can set the team up, prepare, shape them but there is no excuse for some of their performances. None at all.

“I’ve seen players waving their arms around, giving the ball away, blaming other people. It’s not acceptable. I’d be very angry if that was my players doing that.”

Some of the players lost their belief that Solskjaer was the right man to get them out of their slump after the defeat against Leicester while other senior figures were alarmed at the half-time team talk in the defeat to Liverpool.

The lack of a coherent structure led to others claiming privately that they did not know what their roles were supposed to be.

All of those are legitimate concerns and until a new manager is appointed and the coaching staff changed it is possible that those issues will not be addressed.

Whatever the system against Villarreal on Tuesday night, it is time for the players to take responsibility and step up.

They can no longer hide behind an out-of-depth manager to excuse poor performances.