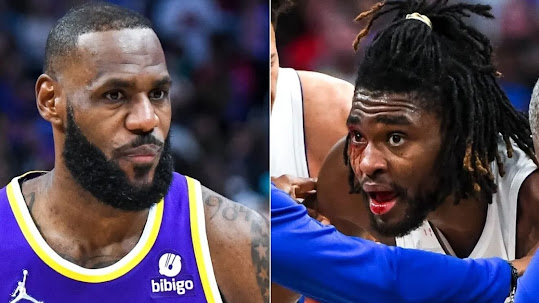 LeBron James has been suspended for one match for the first time in his career after clashing with Isaiah Stewart as the Los Angeles Lakers beat the Detroit Pistons on Sunday night.

James and Stewart were both ejected for their roles in the fracas - only the second time in James' 19-year NBA career he's been ejected from a game.

Stewart will miss two games for his role in the clash.

The incident happened in the third quarter. LA's James appeared to strike Pistons centre Stewart in the face as they battled for a rebound, leaving him with a large cut near his right eye.

Stewart then repeatedly had to be held back by team-mates and coaching staff as he tried to retaliate.

Both were then ejected from the game after an official review.

On Monday the NBA said Stewart was suspended for "escalating" the incident and "repeatedly and aggressively" pursuing James. James was handed his suspension for "recklessly hitting Stewart in the face" and "initiating" the altercation.

James will serve his suspension on Tuesday when the Lakers travel to play the New York Knicks.

"Everyone in the league knows LeBron's not a dirty guy," said James' Lakers team-mate Anthony Davis after the game. "In fact, when he knew he hit him, as soon as he did it, he looked back at him like, 'Oh, my bad. I didn't try to do it'."

"It was a tough play with Isaiah," said Pistons coach Dwane Casey. "His eye got cracked all the way open and he was upset for a reason. I don't think James is a dirty player, but again, it got them going."

Davis top-scored for the Lakers with 30 points and Russell Westbrook added 26 as the Lakers came back from 17 points down in the second half.