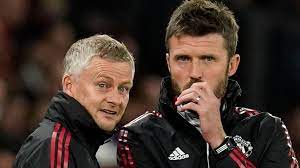 There are then four days until Arsenal visit Old Trafford on 2 December and by then some clarity will surely have emerged around what, to outsiders at least, appears a pretty confused picture.

BBC Sport analyses the factors United's hierarchy are wrestling with as they seek to ultimately appoint a manager who can bring success back to the club.

Why do Manchester United want an interim boss?

In their statement confirming Solskjaer's exit, United said they were looking to appoint an "interim manager" to the end of the season.

The wording suggests United accept their preferred choices may not be available until the summer as they are already in work and do not believe Carrick, who has never been a manager, is a viable option to hold the position for the rest of the campaign.

Yet the strategy feels complicated and inherently means the club would be appointing a manager on the basis they will leave within as few as six months when they have found someone better.

Only realists, or older managers possibly not seeking a permanent job, are likely to find that scenario attractive.

Steve Bruce has been mentioned but, despite being a former United skipper, his last months as Newcastle manager are unlikely to inspire optimism among fans - and United have plenty of time and incentive to turn this season around.

Some may wonder if Sir Alex Ferguson, with more pedigree than anyone in the game, could be a luxury stop-gap - but the reality is the Scotsman is now 79.

Blanc is manager of Al Rayyan in Qatar, where the season continues until March. Rangnick is technical director at Russian club Lokomotiv Moscow, who admittedly do take a 10-week winter break from the middle of December.

Lucien Favre has been out of work since being sacked by Borussia Dortmund in 2020. The 64-year-old has been linked with numerous Premier League jobs and was close to getting the Crystal Palace job in the summer before turning it down.

Who is making the decisions?

Amid the fall-out from the European Super League debacle, United executive vice-chairman Woodward said he would stand down by the end of the year.

At the time, many felt that meant the summer. But Woodward remains in post and while it is highly unlikely he will sever ties with United completely when he does eventually stand aside, that has the potential to create uncertainty around negotiation.

United say Woodward is getting on with his job and they do have other people, negotiator Matt Judge for a start, who do some work around recruitment.

But for now, Woodward and his likely replacement, managing director Richard Arnold, are both involved and are understood to have been on the call with co-chairman Joel Glazer on Saturday evening when it was resolved Solskjaer had to go after the defeat at Watford.

Woodward was the man who delivered the bad news to Solskjaer in person and was also the man who asked Carrick to take temporary charge.