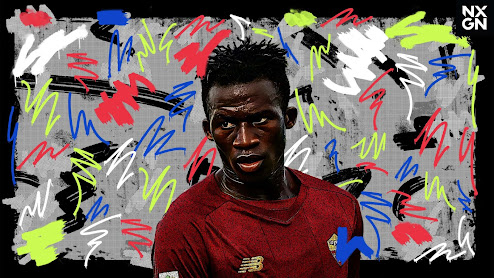 In Italy, Roma's youth academy is regarded as one of the most prolific when it comes to developing youngsters who go on to enjoy successful Serie A careers.

Francesco Totti and Daniele De Rossi are the standard bearers for the Giallorossi, and this season Lorenzo Pellegrini has taken great strides towards one day joining that duo as a homegrown legend at Stadio Olimpico.

Roma fans are, however, always on the lookout for the next youngster to break into the first team picture, and this season looks set to be the turn of Felix Afena-Gyan.

Thrust into the senior ranks by Jose Mourinho as his side began to falter in October, most expected the 18-year-old to play a fleeting role, making the odd cameo appearance off the bench in a bid to earn experience.

Then Sunday night's clash with Genoa changed everything.

With the game goalless entering the final 15 minutes, Afena-Gyan was introduced as a substitute in a bid to inject some energy into his side's performance.

Eight minutes later, the teenager was wheeling away after his placed, first-time finish had nestled into the bottom corner to give the visitors the lead at Stadio Luigi Ferraris.

He was not finished there, as in stoppage time Afena-Gyan latched onto a loose ball before unleashing a 25-yard thunderbolt into the top corner to secure a 2-0 victory for Mourinho's men.

“I promised him that [if he scored] I would buy him a pair of shoes that he really likes, that cost €800," Mourinho revealed to DAZN after seeing Afena-Gyan become the third-youngest foreign player to score multiple goals in a Serie A match.

"He came over to me and told me not to forget that. Tomorrow morning, I will go and buy them.

"Then, tomorrow, the Primavera (Under-19s) will be playing – and I’m sorry for (manager) Alberto De Rossi, but Felix won’t be playing with them!”

Mourinho was good to his word, as Afena-Gyan posted a video on Monday of him receiving his new footwear from the two-time Champions League-winning coach.

From the Sunyani district of Ghana to Mourinho buying him trainers in the Eternal City, Afena-Gyan has come a long way in a short period of time.

Until 2018, the youngster's only real competitive football came for his school side before he was signed up to the EurAfrica FC academy, a youth football project only established in 2018.

There he continued to impress watching scouts – including Roma's Morgan De Sanctis and Simone Lo Schiavo – and though he had never played in any of Ghana's league sides or for the country as a youth international, he suddenly became the subject of a transfer tug-of-war between Roma and AC Milan in January 2021.

Roma won out, in part due to one of the most famous Champions League comebacks of recent years.

"It is amazing. It is a dream come true for me," he told BBC Sport following his move to Europe.

"Roma made a lasting impression on me that night against Barcelona (in April 2018), and so being a part of this amazing club now is definitely a dream come true."

Afena-Gyan wasted little time in making an impact on his dream club, scoring three goals in his first four games for the U18s side before quickly being promoted to De Rossi's Primavera outfit, for whom he scored four and assisted two in 15 appearances to end the campaign.

He kicked on again at the start of the 2021-22 season, netting six times in just five Primavera matches to catch Mourinho's eye and earn a first-team debut against Cagliari on October 27.

His pace and power helped swing that game in Roma's favour late on before, with one further senior outing under his belt, he enjoyed his moment in the sun against Genoa three-and-a-half weeks later.

A 100-metre sprinter during his school athletics days, it is Afena-Gyan's speed that has given him an advantage since he moved to Italy, but his finishing ability and movement off the ball is also encouraging for a striker who can play anywhere across the forward line.

Aside from his physical gifts, Mourinho has also noted his humility, even if his agent, Oliver Arthur, insists Afena-Gyan has lofty ambitions.

"He is a player with lots of confidence, pace and power. His most significant strength is his ability to score," he told BBC Sport.

"He also has the character of wanting to be the best in the world, and has started working towards that.

"His move is already changing a lot of perceptions about African talent. Most people thought it was not possible to move directly from Africa into the big clubs in Europe, but he has opened the way and proved it's possible."

Unsurprisingly, the eyes of the Ghanaian footballing fraternity are now on him, and reports suggest he was being considered for a first call-up to the full international side for November's World Cup qualifiers.

Afena-Gyan turned down the opportunity, feeling he was not ready to represent the Black Stars as he continues to develop his game.

Many at Roma felt that development might include a loan move in January but, after Sunday's heroics, he is unlikely to be let go by Mourinho any time soon.