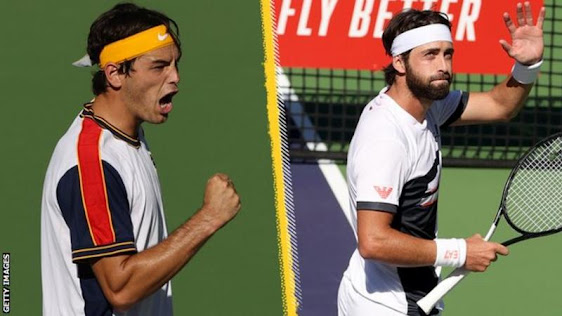 Basilashvili will meet Fritz on Saturday for a place in the final.

It is the first time either player has reached the semi-finals of a Masters 1,000 tournament.

However, Tsitsipas - who won his first Masters 1,000 title at the Monte Carlo Masters in April - regrouped to dominate the second set.

But just when it looked as if the 23-year-old was poised to replicate comeback wins over Fabio Fognini and Alex de Minaur in the previous rounds, Basilashvili secured a break in the opening game of the third and produced some superb winners to upset Tsitsipas.

"I have played really great matches this tournament," Basilashvili said.

"First time in the quarter-finals and it is a big court and Stefanos is a super tough player. I had to keep my physical levels and energy levels in really good shape because I knew mentally I would be a little bit tight and stressed."

In Friday's second quarter-final, Zverev was serving for the match at 5-3 up in the third set, only to hit two double faults as Fritz hit back to secure a crucial break.

The 23-year-old eventually forced a tie-break, which he dominated to book his place in the last four.

It was a major shock, with Zverev having won 20 of his past 21 matches on hard courts and searching for his third Masters 1,000 title of the season.

"Today was just not really my day, to be honest," said the world number four. "I was close to winning, but the level of tennis was just not quite there for me. Fritz played a great match. He deserves to be in the semi-finals. Today mentally is not easy for me.

"I have played well. But this one hurts because I knew that after Stefanos lost this morning, I was kind of the favourite to win this tournament, but my tennis wasn't there."

Fritz said: "I was really down and out but I found a way to put myself into it. I really wanted to make him have to close me out and I was able to get back into the match.

"Normally you would be so nervous in those situations and in the third set tie-break, but I felt so confident being aggressive, going after my game. It feels really great to play well with the pressure on."