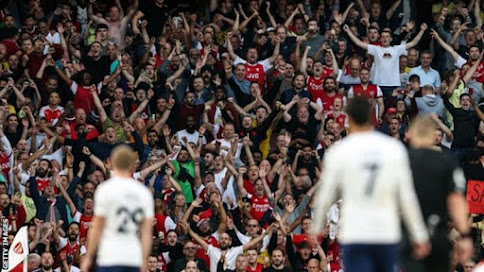 Spurs were top of the league after three games following a trio of 1-0 wins, but Sunday's 3-1 loss to Arsenal was their third straight defeat.

That result followed 3-0 reverses against Crystal Palace and Chelsea.

"It doesn't feel like the right fit - he's got to win over the Spurs fans and I'm not so sure he can," said Sutton.

"He wasn't first choice or second choice. Last season his Wolves team were on the decline and the Spurs fans were never going to like his brand of football."

Meanwhile, the Tottenham Hotspur Supporters Trust has requested a meeting with chairman Daniel Levy and his executive team to outline their 'short and long-term strategic vision'.

Tottenham conducted a protracted search for a new manager in the summer following the sacking of Jose Mourinho.

Spurs made contact with Paris St-Germain boss Mauricio Pochettino about the possibility of the Argentine returning to manage them but the French club were not prepared to let him go.

Former Chelsea boss Antonio Conte appeared set for the role, only for talks between the Italian and Spurs to break down.

Ex-Roma manager Paulo Fonseca then thought he was taking over, only to be sidelined in favour of Gennaro Gattuso, who was rejected when fans reacted badly to the existence of social media posts which brought the Italian's commitment to inclusivity into question.

No sooner had Nuno been appointed than he had to deal with speculation over Harry Kane's future, but the England captain stayed and an opening-day win over champions Manchester City seemed to have set the tone for a positive season.

But their recent results have been matched by some damning statistics - they rank 20th out of 20 in the Premier League for shots and chances created this season and have covered less distance than any other side.

"He's been put in an incredibly difficult situation, there's no doubt about that," added Sutton, speaking on BBC Radio 5 Live's Monday Night Club.

"But Nuno's comments blaming himself after the Arsenal game were worrying, and blaming the players as well.

"There were players not running back, unsure about what jobs they were being asked to do. They were a complete and utter shambles. I don't think Spurs fans will ever get the type of football they want under Nuno. Chuck in the Kane stuff as well and it's turning into a bit of a nightmare.

"The appointment simply didn't fit and that's on Daniel Levy."

Levy was voted onto the executive board of the influential European Clubs' Association earlier this month but he remains a divisive figure amongst the Spurs support.

"We have asked for a meeting with the club's executive board to discuss both the short and long-term strategic vision for the football club," said a THST statement.

"The club's board will be aware of the questions currently being asked by the Trust, by fans and by the media. This meeting is an opportunity for the decision makers to explain their plans to supporters.

"This explanation should include plans for this season and beyond, an explanation of how success will be measured and how the club's DNA will be regained."

"There's no unit, no stability and no organisation - it's almost like they're playing for themselves," said Richards.

"When a manager comes in who is not first choice, you can't use that as an excuse. Yes there might be more glamorous managers but the players have to respect the amazing job Nuno did with Wolves. They were doing well.

"No matter which manager comes in you've got to give them the same respect and fight for them. You're getting judged as well."