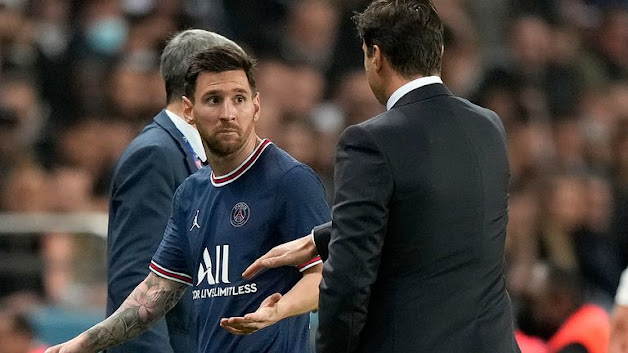 Summer signing Messi hit the angle of post and bar with a free-kick in the first half and forced a save from Anthony Lopes but was below his best.

With the score 1-1, the 34-year-old was replaced by right-back Achraf Hakimi and did not look happy at coming off.

Messi was given a round of applause, but not a standing ovation by his fans.

The forward, who left Barcelona this summer, did not stop but briefly said something to boss Mauricio Pochettino while walking past him to the bench.

Another PSG substitute, Mauro Icardi, scored the injury-time winner in the Ligue 1 game, as he headed in Kylian Mbappe's cross.

Lucas Paqueta swept in Karl Toko Ekambi's cross to give Lyon the lead.

But Neymar equalised with a controversial penalty. He appeared to pull back Malo Gusto in the box but the teenage Lyon defender was penalised instead, with a spot-kick given.

Neymar waited for Lopes to move before slotting in.

PSG manager Pochettino said his decision to substitute Messi was not controversial.

"I think we all know we have great players in this 35-man squad," said the former Tottenham manager. "Only 11 can play, we can't play more. The decisions in the game are made for the good of the team and each player.

"These are decisions that have to be made by the coach. As for his reaction, I asked him how he was, he said he was OK. That was it. That was our exchange."

This was Messi's third game for Paris St-Germain - the third game he has played for a club other than Barcelona.

It took 40 days between joining and making his home debut for fitness reasons and because of the last international break.

His debut came last month as a second-half substitute in a 2-0 win over Reims, with the goals scored before his introduction.

He made his first start on Wednesday in the 1-1 Champions League draw with Club Bruges. Like that game, the much-hyped front three of Mbappe, Neymar and Messi all started on Sunday.

Messi hit the angle of the woodwork in Belgium and again in Paris - and is still waiting for a first goal in PSG colours.

He showed a few moments of link-up play with his old Barcelona team-mate Neymar, but fitting into the rest of the team remains a work in progress.

PSG's next game is Wednesday's Ligue 1 trip to Metz, as they bid to make it seven wins from seven at the top of the league.