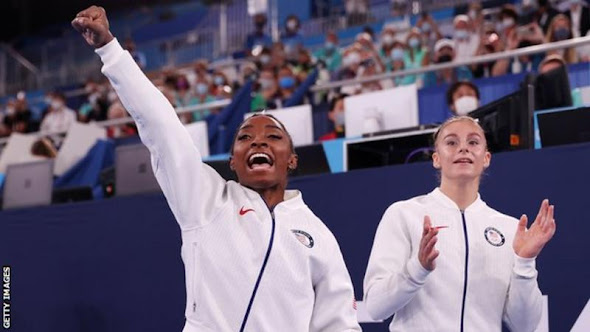 In a New York Magazine interview the 24-year-old says "I should have never made another Olympic team" after "everything I've gone through for the past seven years".

Biles spoke in 2018 about being abused by team doctor Larry Nassar, who is now serving a life sentence in jail.

"It was too much," the American says.

"But I was not going to let him take something I've worked for since I was six years old.

"I wasn't going to let him take that joy away from me. So I pushed past that for as long as my mind and my body would let me."

Biles was expected to win more golds at Tokyo 2020 but withdrew from the five finals, saying she had to focus on her mental health.

She later explained she had the 'twisties' - a dangerous mental block in which gymnasts lose their orientation in the air - and went on to compete on the balance beam, where she won bronze.

Biles had been seeing a therapist in the run-up to the Games and says anxiety set in when she arrived in Tokyo, in part due to coronavirus restrictions which barred fans and families from attending.

"Leading up to it, I got more and more nervous," she says. "I didn't feel as confident as I should have been with as much training as we had."

The 19-time world champion describes attempting to compete with the 'twisties' as "basically life or death", adding that after it set in mid-vault "it's a miracle I landed on my feet".

Biles also highlighted extra pressure placed on her because of her race.

"As a Black woman, we just have to be greater," she says.

"Because even when we break records and stuff, they almost dim it down, as if it's just normal."

Earlier in September Biles testified before the Senate as a committee examined shortcomings in the FBI's investigation into Nassar.

She is now back in therapy and is touring America with other members of the United States' gymnastics team, but has not yet decided if she will return to competition.

"This will probably be something I work through for 20 years," Biles says.

"No matter how much I try to forget. It's a work in progress."