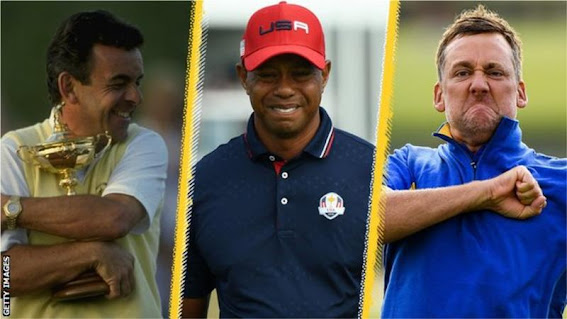 There would be no element of surprise, no suspense, no drama and no celebration of unexpected feats.

There would be no Miracle of Medinah. Nor a plethora of other startling European Ryder Cup victories against American opponents expected to crush them - based, on rankings and major wins.

Analysing the two teams before this year's contest at Whistling Straits would present a similar conclusion.

The Americans possess eight of the world's top 10 in their 12-man team, with six major winners among their ranks. In Jon Rahm, Europe possess the world number one but Viktor Hovland is the next at 14.

It is a theme which has run through the build-ups to many Ryder Cups over the past three decades. Yet Europe have still won seven of the past nine events.

"I've said this so many times but it is still nevertheless true: the Ryder Cup is an opportunity for Europe's golfers to show just because America has got the wealth, the courses, the weather, that they haven't cornered ambition," said Tony Jacklin, who captained Europe to their first triumph on US soil in 1987.

He also led the side to victory in 1985 and a tie in 1989 which meant Europe retained the trophy. He is widely credited for transforming the culture of the European team and installing a camaraderie which still exists today.

"The European players on that team, they all have this vein running through them: they are excited to have this opportunity to show they are as good as the Americans are," he added.

"It is no different this time."

The European 'party atmosphere' contributes to success - or is it a misconception?

The perception of the American side has long been one of star names not caring about the team format, unwilling or unable to mould into the format of a matchplay event which differs greatly from the individuality of the strokeplay on the PGA Tour.

Steve Stricker, the US captain in his native Wisconsin this week, insists it is a "misconception".

"When you're getting beat, it's hard to look like you're bonded," he said on Monday.

"But I've been part of plenty of these team rooms where the chemistry inside is nothing but great. Sure, we've had occasional things, occasional hiccups along the way but for the most part it's always been very good.

"They are very proud to play for the USA wearing red, white and blue."

But Brooks Koepka, the four-time major winner and one of the top-10 ranked players in the American team, reinforced that view last week by admitting he found it "tough, odd and hectic" to break from his usual routine and adapt to the requirements of the Ryder Cup.

He has also been embroiled in a long-running spat with Ryder Cup team-mate Bryson DeChambeau.

Koepka's admission brought stinging criticism from former US captain Paul Azinger who suggested he should not play if he does not love it, while the comments did not surprise Jamie Donaldson, who famously clinched victory for Europe in the 2014 event at Gleneagles.

"The Europeans are much better as a team," the Welshman told BBC Sport. "The Americans are much more individual. When we come together, in my experience, it feels like a party atmosphere. There is so much of a buzz.

"When you go in the European team room it is a bit like playing with your mates.

"It stems from staying in the same hotel [on the European Tour] and going down for dinner in the evening. If there is no-one to go out with just go downstairs and there is someone to go out to dinner with.

"But in America most of them are in their room for 6pm and not even going out for dinner. It is room-service tray central."

Gelling talent like that together, though, has long been a conundrum for a host of American captains.

"The camaraderie just isn't there with them," believes Donaldson, who says there were no organised bonding sessions among the Europeans in 2014 - other than table tennis competitions in the team hotel.

"For Europe, it happens from nowhere. It's not something you have to orchestrate and make sure everyone is involved: it happens automatically.

"There is no forced effort or no forced friendship. It is a natural occurrence. It's difficult to explain."

"If the bonding process is too contrived, then it is awkward," the Englishman, who missed out on a wildcard for this year's event, told Today's Golfer magazine. "The bond is an organic thing."

How a change in the European mentality led to sustained success

While Rose says the bond among the European team has evolved organically, it is hard to look past Jacklin, who won two majors, as the person who sowed the seeds almost 40 years ago.

A seven-time player in the event, Jacklin took over as captain in 1983 and led Europe to unprecedented success, including handing the US their first defeat at home after 13 successive victories.

In the decades before, the Americans dominated as Great Britain and Ireland won just three of the first 22 contests before expanding to incorporate players from the rest of Europe in 1979.

As much as anything, Jacklin believes the defeats came down to an ingrained inferiority complex which stemmed from the top.

It was a mentality which the Englishman immediately knew had to change when he took over from John Jacobs before the 1983 event at Palm Beach Gardens, Florida.

"There was an attitude that it was more important to turn up than to win. Winning didn't enter it," said Jacklin, regarded as Britain's greatest player in the 1960s and 1970s.

"We'd been going in with high expectations but then were beaten like a drum for large parts throughout the 60s and 70s. It was very one-sided.

"In 1979 John Jacobs said we were facing 'the greatest American team ever assembled'. That's the last thing you want to hear as a player.

"I brought the attitude into the 20th Century, put it that way. It wasn't about turning up, being good sorts but not winning. Not for me it wasn't, anyway."

After being overlooked as a player in 1981, Jacklin said he was "well ticked off" with the Ryder Cup. Severiano Ballesteros, the enigmatic Spaniard regarded as one of the most naturally-gifted players to pick up a club, was also ready to never play again after a row with the European Tour over appearance money.

The future of the Ryder Cup - and its development into one of the world's most passionate and unique sporting team events since - arguably pivoted with Jacklin's appointment.

Jacklin was putting balls on the practice green at Sand Moor in Leeds, when he approached by Ken Schofield, the executive director of the European Tour, and Colin Snape, the secretary of the PGA, to take over as captain.

His initial thought was to tell them to "sod off", he says.

"I didn't want anything to do with it. I didn't care if I did it or not. Eventually I said I'd do it but only on my own terms.

"I wanted to fly over on Concorde, I wanted the team to be kitted out smartly, I wanted us to take our own caddies and not have to use American caddies.

"If they agreed to all that, I said I would do it."

With Ballesteros talked round, tickets on the supersonic cross-Atlantic jet booked, and sartorial uniformity assured, Jacklin and the team headed over to Florida.

Jacklin's leadership style was uncomplicated and effective: instilling a belief and togetherness which he felt had previously been missing.

"At the first gathering in the team room, I felt the need to introduce myself and tell them where I was coming from," said Jacklin, who is so synonymous with the competition that the title of his new book is called 'My Ryder Cup Journey'.

"There were some hooks outside this door. I told them 'if you've got an ego, hang it on that hook before you come through this door, because we haven't got time for egos in here. This is the team room, this is where we unite as a team'.

"The message was loud and clear from them. This is where they wanted to be."

Reassuring his players of their quality, complemented by recruiting the revered Ballesteros to gee up a team-mate with soothing words and a comforting shoulder rub, was a key part of Jacklin's success.

"I showed respect to the players, showing them the respect which I thought they deserved," he said.

"They responded to that, I saw it in front of my eyes. They respected me for treating them like the great players they were."

The US had won their previous 12 Ryder Cups at home by a margin of at least four points. Jacklin's men lost by one.

"What we did at Palm Beach proved we were on the right track," he said. "We talk about great Ryder Cup performances and I think that's up there."

"I never tried to tell any of them how to play, all I could do was take care of them and make sure they had everything they needed. The response was amazing. They dug deep.

"This is where the unity and commitment from the team was fantastic. And it has been the same ever since."

Could this US team swing momentum away from Europe?

There is a feeling this could be the opportunity for the Americans to have a cultural reset like the Europeans did under Jacklin.

With eight players aged under 30 and six rookies - Morikawa and Olympic gold medallist Xander Schauffele fall into both brackets - the hosts are hoping victory at Whistling Straits could be the dawning of a new era.

"We're not coming with bad experiences. I see that as a positive," says Stricker.

"We are using that as a positive and our guys are super fired up and ready to go."

Donaldson concedes it is going to be "very difficult" for Europe to win in Wisconsin.

"This is a seriously strong American side and it is a big blueprint for the future with a lot of them lads being quite young - and seriously good," he said.

"If they all get on really well then it could turn the other direction."