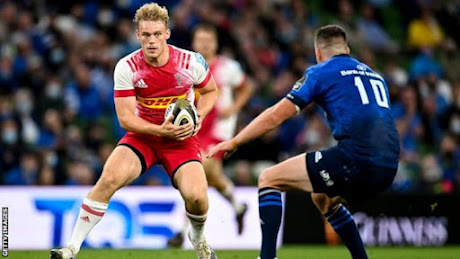 Billy and Mako Vunipola, Jamie George and George Ford have all been left out of the 45-man squad.

Jones stressed "the door isn't closed" to those players not involved.

Lynagh, whose two late tries saw Harlequins win their first Premiership title for nine years as they beat Exeter in a thrilling final in June, is the son of Australia legend Michael.

Nine players who made their debuts in the summer, such as fly-half Marcus Smith, are also included as Jones looks to the future with the next World Cup two years away.

As was the case halfway through the last World Cup cycle, when Jones began to phase out the likes of Dylan Hartley, Chris Robshaw, James Haskell, Mike Brown and Danny Care, the England head coach has started the process of revamping his squad with the tournament in France in 2023 in mind.

"We have left out some experienced players but we're really clear that the door isn't closed to them, and we're looking forward to seeing them work hard to get back into contention," Jones said.

However Ford's exclusion points paves the way for Smith, who was called into the British and Irish Lions squad in South Africa, to finally get an extended run at fly-half this autumn.

An experienced core does remain in place, including the 109-capped scrum-half Ben Youngs, while prop Joe Marler has again made himself available having not featured in 2021.

"This is an exciting squad made up of experienced players and young guys who did well in the summer and have earned their place again," Jones added.

Jamie Blamire and Trevor Davison of Newcastle, along with Alex Dombrandt, Joe Heyes, Lewis Ludlow, Adam Radwan, Harry Randall, Smith and Freddie Steward all retain their places after first being capped in the summer matches against the United States and Canada.

This mini camp forms part of England's preparation for their November Tests, with Tonga, Australia and South Africa the opposition at Twickenham.