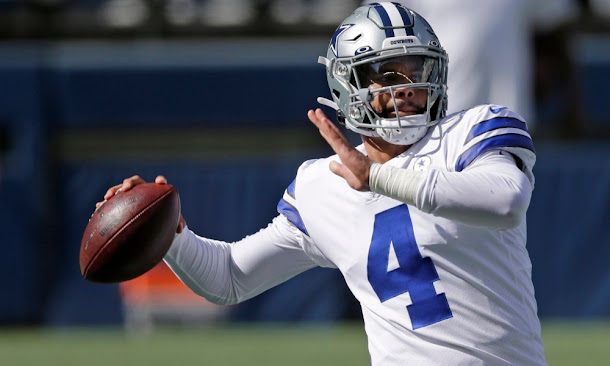 Prescott, who broke and dislocated his ankle in October 2020, helped his side beat the Philadelphia Eagles 41-21.

He shed tears during the pre-game anthem before dominating the game.

"I am just thankful of everything I have been through to be back here doing what I am doing," the 28-year-old said.

"A couple of times [it got emotional]. During the warm-up, pre-game, and then the anthem. Then it was go time."

Prescott returned to action earlier this month after completing his rehabilitation but admitted before Monday's game that the first match back at the AT&T Stadium would be special.

He completed 21 of 26 passes for 238 yards while Ezekiel Elliott rushed for two scores to help the Cowboys move past the Eagles and go top of the NFC East division.

Trevon Diggs returned an interception for a touchdown, Dalton Schultz had six catches for 80 yards and two touchdowns, and Cedrick Wilson caught one touchdown pass in the win.