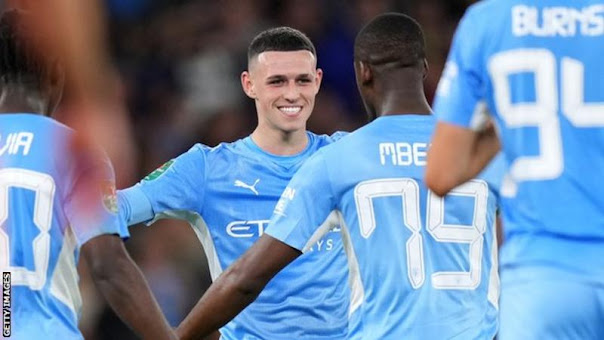 Mahrez claimed his double either side of half-time, with Phil Foden and Ferran Torres also beating veteran goalkeeper David Stockdale.

Substitute Cole Palmer, 19, added the sixth with his first goal for the club.

He ran from the halfway line before curling in a fine left-footed shot from 20 yards.

Victory means Guardiola's side are unbeaten in the competition since October 2016, although they did lose last season's semi-final second leg to Manchester United, and have reached the last 16 for the fifth successive season.

Manchester City manager Pep Guardiola: "I am just going to say thank you very much to all the Academy. They have many good players, not just one or two. We can count on them absolutely. With their skills and desire, they have got it at this club. I am so proud to be manager of this club."

Wycombe manager Gareth Ainsworth: "The first 22 minutes were special! What a moment for the fans who travelled all this way. A few months ago they were locked in their homes and couldn't see us in the Championship. Those scenes when the goal went in were incredible."