Football: I won't answer any questions of my future - Koeman 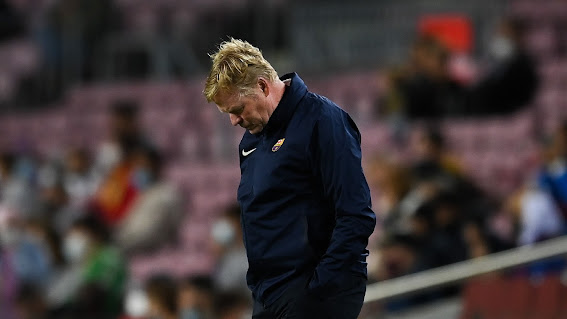 It did little to paper over the cracks of another poor home display as the pressure continues to build on Koeman.

Centre-back Araujo - playing as a makeshift striker - found the net right at the end of a half Barca dominated.

Granada had led from the second minute through Domingos Duarte's header.

But having been humbled by Bayern in the Champions League last week, it will do little to lift spirits, as questions continue to be asked about Koeman's future as Barcelona boss.

And Granada will be disappointed not to have picked up a first win of the season - and second victory in two seasons at the Nou Camp - after dealing so well for so long with the home side's aerial bombardment.

The final whistle was met with whistles by the home crowd, who were disappointed with the result and unimpressed by the hosts' direct style of play.

"We changed our style a little bit," Koeman said. "If you see the list of players, what do you do? Play tiki-taka? Tiki-taka when there are no spaces?

"We did what we had to do. We tried to win another way. We don't have players one-on-one or with speed. We're talking... I'm not going to say more because it seems I have to argue about everything."

In total, Barca sent over a remarkable 45 open-play crosses in the game in search of an equaliser, with only a Sergi Roberto poked shot and Araujo header superbly saved by Luis Maximiano to show for their first-half efforts.

It was only in the second period, with towering defenders Gerard Pique and Araujo pushed up top alongside substitute striker Luuk de Jong that the visiting backline was properly and consistently tested.

It looked like De Jong had spurned the golden chance, somehow heading over from inside the six-yard box, but Araujo showed him the way with a composed and well-taken effort.

Barca remain unbeaten in La Liga, with this result taking them up to seventh with eight points from four games.

They now face two games before the week is out - at Cadiz and then at home to Levante - before a big Champions League trip to Benfica a week on Wednesday.