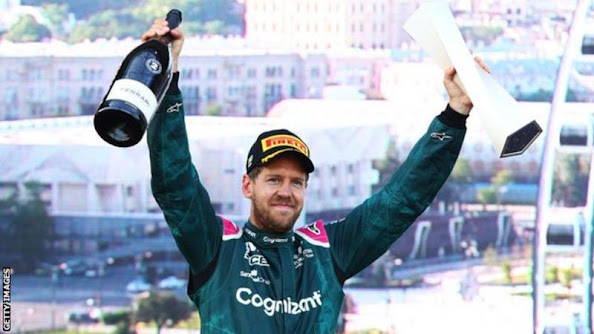 Vettel had a contractual option to take up to continue with the team and the four-time champion has decided to race on in Formula 1 with them.

The 34-year-old said he was "really looking forward" to the new style of car that will be introduced next year.

"Every team will be starting from a new beginning, so it will be a great opportunity for us," Vettel said.

F1 has completely revised the regulations for next season, changing the way the aerodynamics work and making the rules more prescriptive, in an attempt to close up the field and make overtaking easier.

Vettel said: "The look of the new generation of Formula 1 cars is very different and the new technical regulations should give us cars that can race much more closely than recently.

"More exciting racing will be great for the drivers as well as for the fans.

"I believe in the strength of our new growing team, so I am already looking forward to 2022."

The four-time world champion joined Aston Martin after six seasons at Ferrari, the last two of which were difficult as he faced the challenge of new team-mate Charles Leclerc and then a final season which he started knowing the team had already signed his replacement.

He has had an up-and-down 2021 season, taking a podium at the Azerbaijan Grand Prix amid a mix of both strong and unconvincing performances.

Team owner Lawrence Stroll, father of Vettel's team-mate, said earlier this week that he was "delighted" with Vettel.

Stroll added on Thursday: "Both Lance and Sebastian have delivered some excellent performances.

"They have had more than their fair share of bad luck, but in 2022 we are delighted to be continuing with such an excellent blend of youthful talent and experienced expertise."

The announcement of Aston Martin's line-up leaves only three seats on the 2022 grid yet to be confirmed - one at Alfa Romeo alongside new signing Valtteri Bottas, and the two at back markers Haas.