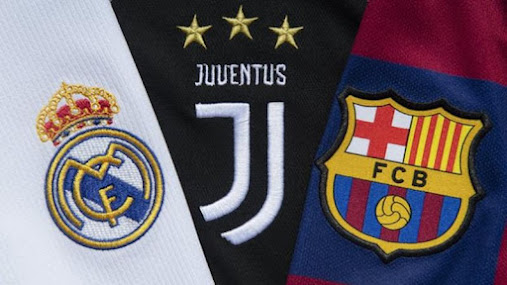 The clubs were among the 12 "founding" members of the breakaway league, which later collapsed.

The trio, who have refused to renounce the project, were being investigated for "a potential violation" of Uefa's legal framework.

Uefa says it is now "as if the proceedings had never been opened".

"The Uefa Appeals Body has declared today the proceedings null and void," a statement read.

The moves comes after a court in Madrid ruled that Uefa should not punish the three remaining clubs.

European football's governing body has also said it will not yet collect the goodwill payments agreed with the other nine Super League clubs - Arsenal, Chelsea, Liverpool, Manchester City, Manchester United and Tottenham plus Atletico Madrid, Inter Milan and AC Milan. The English clubs had agreed a combined payment of £22m in June.

In a further statement released on Tuesday, Uefa added it had "filed a motion for the recusal of the judge presiding over the current proceedings as it believes there are significant irregularities in these proceedings.

"Uefa fully expects the judge in question to immediately stand aside pending the full and proper consideration of this motion."

Why has the legal fight stopped?

Barca, Real and Juventus have the backing of a court in Madrid, which in April ruled Uefa could not take any action against the Super League because it represented an infringement of European free trade laws.

This has now been referred to the European Court of Justice for a ruling over whether Uefa do have that right.

However, while that case continues, Uefa has responded to last week's demand by a Madrid judge to suspend its disciplinary proceedings against the three remaining clubs by deciding to halt its legal pursuit of them.

Uefa says it will not request any goodwill payments from clubs "as long as the Court proceedings in Madrid involving, among others, Uefa are pending".

"Uefa maintains its view that it has always acted in accordance with not only its statutes and regulations, but also with EU law, the European Convention on Human Rights and Swiss law in connection with the so-called Super League project. Uefa remains confident in and will continue to defend its position in all the relevant jurisdictions," it said in a statement.

"Uefa will continue to take all necessary steps, in strict accordance with national and EU law, in order to defend the interests of Uefa and of all football stakeholders."

Not the end of the matter

The last in a flurry of statements from Uefa about the European Super League saga underlines their position, they do not trust the judge in Madrid and do not think he is acting in an even-handed manner in their dispute with Juventus, Barcelona and Real Madrid.

However, for now, this is about positioning because the whole issue will be subject to a decision by the European Court of Justice on 18 October over whether they should rule over Uefa's ability to take action against clubs for setting up a rival competition.

They could throw the whole thing out and say it has been established Uefa do have the power. Or they could take it on, setting in motion a process which could take months or possibly years to resolve. Equally, the ECJ could decide it is not in their remit to rule on the situation - which is thought to be unlikely but not completely out of the question.

Uefa feel they are in a strong position. But in legal argument, nothing can be taken for granted.

By complying with the Madrid court - even though they don't feel there is a good reason for what has been demanded - Uefa feel it puts them in a more secure position to argue their case if the ECJ decides it is not one for them.