Cristiano Ronaldo scored an injury-time winner as Manchester United came from behind to beat Villarreal in an action-packed Champions League Group F contest. 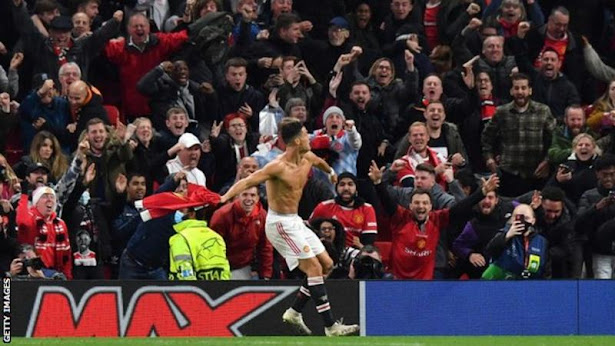 The repeat of last season's Europa League final, which the Spanish side won on penalties, looked to be heading for a draw after another disappointing United performance but summer signing Ronaldo stroked home from Jesse Lingard's lay-off to spark jubilant scenes at Old Trafford.

However, visiting manager Unai Emery will be left wondering how his side did not come away with all three points.

United started brightly, with Bruno Fernandes scooping over and Ronaldo also failing to hit the target with a header in the opening seven minutes.

Villarreal took charge thereafter but could not score in a first half in which they created chance after chance.

Striker Alcacer should have scored when Raphael Varane misjudged the bounce of the ball but dragged his shot wide, and Alberto Moreno and Pino both blazed over from promising positions.

But they did break the deadlock at the start of the second half as Danjuma got in behind and pulled the ball back for Alcacer to convert from close range.

United were finding it difficult to make inroads but equalised through Alex Telles' moment of genius, as he smashed a first-time volley from 20 yards into the bottom corner.

Ronaldo's winner means Ole Gunnar Solskjaer's side pick up their first win while, in the group's other tie, Atalanta beat Young Boys 1-0 to go top of the table.

United were heading for a third straight game without a win - after being knocked out of the Carabao Cup by West Ham last week and beaten by Aston Villa in a limp performance on Saturday - but the Portuguese superstar had other ideas.

Making his 178th appearance in the Champions League, the most of any player, Ronaldo coolly converted in the 95th minute for his fifth goal of the campaign.

The home supporters erupted as the goal went in, with Ronaldo running to the corner, ripping off his shirt and throwing it into the air in celebration.

Fans stayed inside the stadium long after full-time, serenading their returning hero with chants of "Viva Ronaldo".

Though they ultimately collected three points, Solskjaer's side looked to be papering over the cracks as they once again failed to find any real cohesion in the final third of the pitch.

Ronaldo, Fernandes, Mason Greenwood, Jadon Sancho and Paul Pogba all started in front of a raucous crowd, but there seems to be little connection between a frontline filled with attacking talent.

Adding to their early misses, Fernandes flashed a shot wide and substitute Edinson Cavani somehow headed off target at the far post with a free net to aim at.

The crowd became more and more disgruntled as Villarreal deservedly broke the deadlock on 53 minutes, with Alcacer sliding in from a few yards out.

Gary Neville, the former United captain turned television pundit, had said after the Villa defeat that Solksjaer's side were "delivering moments, but those moments won't go for you in certain games".

On this occasion, Telles smashing volley and Ronaldo's winner brought much-needed joy, but questions remain as to whether Solskjaer lacks a general plan, relying too much on individual inspiration in an attempt to win games.