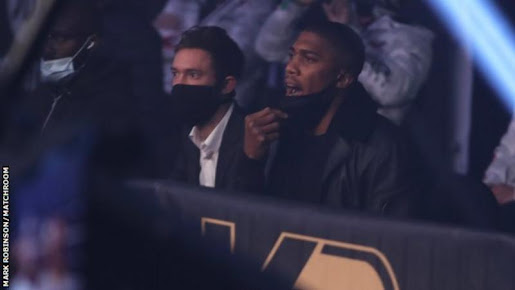 Britain's Joshua will defend his WBA, IBF and WBO heavyweight titles against Usyk in London on Saturday.

Ukrainian Usyk is the mandatory WBO challenger and held all four belts at cruiserweight before moving up in 2018.

He beat Chazz Witherspoon in 2019 before picking apart Britain's Derek Chisora in a points win in November.

"When [Evander] Holyfield came up to heavyweight I think he had six fights at heavyweight before he fought for the championship belt," said Joshua, who was ringside as Usyk beat Chisora.

"Usyk's fought two heavyweights. He's jumping in at the deep end early on.

"But good luck to him - he must believe in himself. He wants to be at the top end early. It's better to swim deep - get in there and get on with it - rather than tread water.

"You could still end up drowning anyway. You could still get caught in a current and drown. You might as well jump in the deep end and try to survive."

More than 60,000 fans are expected to watch Joshua take on fellow London 2012 gold medallist Usyk at the Tottenham Hotspur Stadium, which will host boxing's first major stadium fight in the UK since the Covid-19 pandemic began.

Joshua, 31, is expected to weigh in at more than a stone heavier than his 34-year-old opponent, despite recent photos suggesting he has a leaner physique.

"Advantages physically is one thing but it doesn't make the world's tallest man the heavyweight champion of the world. You have to have the mental capacity to do what you do. He's coming to the ring confident, and so am I.

"In boxing, you have to be aggressive and beat that confidence out of your opponent. It's easy to watch on YouTube and watch from the outside but until you're in front of someone it's then a completely different ballgame.

"This is heavyweight boxing and I'm the heavyweight champion of the world. I don't play games. I'm here to win."